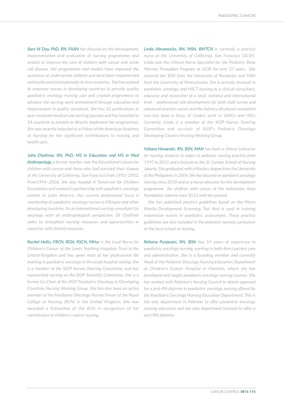 implementation and evaluation of nursing programmes and

models to improve the care of children with cancer and sickle

cell disease. Her programmes and models have improved the

outcomes of underserved children and have been implemented

nationally and internationally in nine countries. She has worked

to empower nurses in developing countries to provide quality

advance the nursing work environment through education and

improvement in quality standards. She has 31 publications in

peer-reviewed medical and nursing journals and has travelled to

14 countries to present or directly implement her programmes.

She was recently inducted as a Fellow of the American Academy

of Nursing for her significant contributions to nursing and

Anthropology, a former teacher, was the Educational Liaison for

children with cancer and those who had survived their disease

Foundation and worked in partnership with paediatric oncology

centres in Latin America. Her current professional focus is

mentorship of paediatric oncology nurses in Ethiopia and other

developing countries. As an international nursing consultant for

seeks to strengthen nursing resources and opportunities in

Children's Cancer at the Leeds Teaching Hospitals Trust in the

United Kingdom and has spent most of her professional life

working in paediatric oncology in the acute hospital setting. She

is a member of the SIOP Nurses Steering Committee, and has

represented nursing on the SIOP Scientific Committee. She is a

former Co-Chair of the SIOP Paediatric Oncology in Developing

Countries Nursing Working Group. She has also been an active

member of the Paediatric Oncology Nurses Forum of the Royal

College of Nursing (RCN) in the United Kingdom. She was

awarded a Fellowship of the RCN in recognition of her

nurse at the University of California, San Francisco (UCSF).

Linda was the Clinical Nurse Specialist for the Pediatric Bone

Marrow Transplant Program at UCSF for over 27 years. She

received her BSN from the University of Rochester and MSN

from the University of Pennsylvania. She is actively involved in

paediatric oncology and HSCT nursing as a clinical consultant,

educator and researcher at a local, national and international

level - professional role development for both staff nurses and

advanced practice nurses and the delivery of cultural competent

care has been a focus of Linda's work in LMICs and HICs..

Currently, Linda is a member of the SIOP Nurses Steering

Yuliana Hanaratri, RN, BSN, MAN has been a clinical instructor

for nursing students in major of pediatric nursing practice from

Jakarta. She graduated with a Masters degree from the University

of the Philippines in 2004. She has focused on pardiatric oncology

nursing since 2010 and as a nurse educator for the development

programme for children with cancer at the Indonesian Anyo

Foundation Jakarta since 2012 until the present.

She has published practice guidelines based on the Metro

Manila Development Screening Test that is used in training

guidelines are also included in the pediatric nursing curriculum

at the local school of nursing.

Rehana Punjwani, RN, BSN has 14 years of experience in

and administration. She is a founding member and currently

at Children's Cancer Hospital in Pakistan, where she has

has worked with Pakistan's Nursing Council to obtain approval

for a post-RN diploma in paediatric oncology nursing offered by

the Paediatric Oncology Nursing Education Department. This is

the only department in Pakistan to offer paediatric oncology

nursing education and the only department licensed to offer a