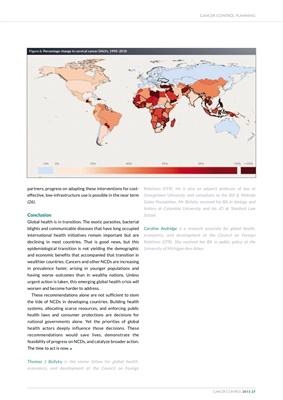 partners, progress on adapting these interventions for costeffective,

low-infrastructure use is possible in the near term

Global health is in transition. The exotic parasites, bacterial

blights and communicable diseases that have long occupied

declining in most countries. That is good news, but this

epidemiological transition is not yielding the demographic

and economic benefits that accompanied that transition in

wealthier countries. Cancers and other NCDs are increasing

in prevalence faster, arising in younger populations and

having worse outcomes than in wealthy nations. Unless

urgent action is taken, this emerging global health crisis will

worsen and become harder to address.

These recommendations alone are not sufficient to stem

the tide of NCDs in developing countries. Building health

health laws and consumer protections are decisions for

national governments alone. Yet the priorities of global

recommendations would save lives, demonstrate the

feasibility of progress on NCDs, and catalyze broader action.

The time to act is now. l

Thomas J Bollyky is the senior fellow for global health,

economics, and development at the Council on Foreign

Relations (CFR). He is also an adjunct professor of law at

Georgetown University and consultant to the Bill & Melinda

Gates Foundation. Mr Bollyky received his BA in biology and

history at Columbia University and his JD at Stanford Law

Caroline Andridge is a research associate for global health,

economics, and development at the Council on Foreign

Relations (CFR). She received her BA in public policy at the