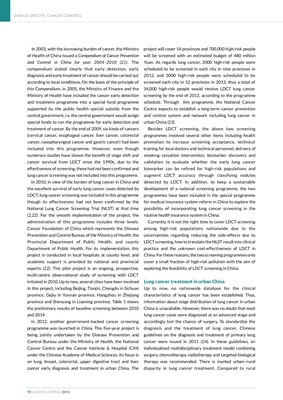 In 2003, with the increasing burden of cancer, the Ministry

of Health of China issued a Compendium of Cancer Prevention

diagnosis and early treatment of cancer should be carried out

according to local conditions. On the basis of the principle of

this Compendium, in 2005, the Ministry of Finance and the

Ministry of Health have included the cancer early detection

and treatment programme into a special fund programme

supported by the public health special subsidy from the

special funds to run the programme for early detection and

treatment of cancer. By the end of 2009, six kinds of cancers

cancer, nasopharyngeal cancer and gastric cancer) had been

included into this programme. However, even though

numerous studies have shown the benefit of stage shift and

cancer survival from LDCT since the 1990s, due to the

effectiveness of screening, these had not been confirmed and

lung cancer screening was not included into this programme.

In 2010, in view of the burden of lung cancer in China and

the excellent survival of early lung cancer cases detected by

LDCT, lung cancer screening was included in this programme

though its effectiveness had not been confirmed by the

(2,22). For the smooth implementation of the project, the

Cancer Foundation of China which represents the Disease

Prevention and Control Bureau of the Ministry of Health, the

Department of Public Health. For its implementation, this

project is conducted in local hospitals at county level, and

academic support is provided by national and provincial

experts (22). This pilot project is an ongoing, prospective,

initiated in 2010. Up to now, several cities have been involved

in this project, including Beijing, Tianjin, Chengdu in Sichuan

the preliminary results of baseline screening between 2010

In 2012, another government-backed cancer screening

programme was launched in China. This five-year project is

being jointly undertaken by the Disease Prevention and

Control Bureau under the Ministry of Health, the National

under the Chinese Academy of Medical Sciences. Its focus is

cancer early diagnosis and treatment in urban China. The

will be screened with an estimated budget of 480 million

scheduled to be screened in each city in nine provinces in

screening by the end of 2013, according to the programme

schedule. Through this programme, the National Cancer

and control system and network including lung cancer in

Besides LDCT screening, the above two screening

training for local doctors and technical personnel, delivery of

validation to evaluate whether the early lung cancer

biomarker can be refined for high-risk populations and

detected by LDCT. In addition, to keep a sustainable

development of a national screening programme, the two

programmes have been included in the special programme

for medical insurance system reform in China to explore the

possibility of incorporating lung cancer screening in the

Currently, it is not the right time to cover LDCT screening

among high-risk populations nationwide due to the

uncertainties regarding reducing the side-effects due to

LDCT screening, how to translate the NLST result into clinical

practice and the unknown cost-effectiveness of LDCT in

China. For these reasons, the two screening programmes only

exploring the feasibility of LDCT screening in China.

Up to now, no nationwide database for the clinical

characteristics of lung cancer has been established. Thus,

information about stage distribution of lung cancer in urban

China is unavailable. However, there was no doubt that most

lung cancer cases were diagnosed at an advanced stage and

accordingly lost the chance of surgery. To standardize the

diagnosis and the treatment of lung cancer, Chinese

guidelines on the diagnosis and treatment of primary lung

therapy was recommended. There is marked urban-rural