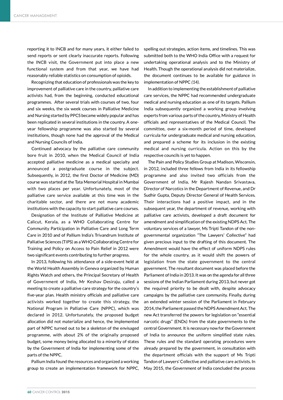 spelling out strategies, action items, and timelines. This was

submitted both to the WHO India Office with a request for

undertaking operational analysis and to the Ministry of

Health. Though the operational analysis did not materialize,

the document continues to be available for guidance in

In addition to implementing the establishment of palliative

medical and nursing education as one of its targets. Pallium

experts from various parts of the country, Ministry of Health

officials and representatives of the Medical Council. The

committee, over a six-month period of time, developed

and prepared a scheme for its inclusion in the existing

medical and nursing curricula. Action on this by the

respective councils is yet to happen.

The Pain and Policy Studies Group at Madison, Wisconsin,

in 2012, included three fellows from India in its fellowship

programme and also invited two officials from the

Director of Narcotics in the Department of Revenue, and Dr

Their interactions had a positive impact, and in the

subsequent year, the department of revenue, working with

amendment and simplification of the existing NDPS Act. The

voluntary services of a lawyer, Ms Tripti Tandon of the nongovernmental

organization "The Lawyers' Collective" had

given precious input to the drafting of this document. The

Amendment would have the effect of uniform NDPS rules

for the whole country, as it would shift the powers of

legislation from the state government to the central

government. The resultant document was placed before the

Parliament of India in 2013. It was on the agenda for all three

sessions of the Indian Parliament during 2013, but never got

the required priority to be dealt with, despite advocacy

campaigns by the palliative care community. Finally, during

an extended winter session of the Parliament in February

2014, the Parliament passed the NDPS Amendment Act. The

new Act transferred the powers for legislation on "essential

narcotic drugs" (ENDs) from the state governments to the

central Government. It is necessary now for the Government

of India to announce the uniform simplified state rules.

These rules and the standard operating procedures were

already prepared by the government, in consultation with

the department officials with the support of Ms Tripti

Tandon of Lawyers' Collective and palliative care activists. In

May 2015, the Government of India concluded the process

reporting it to INCB and for many years, it either failed to

the INCB visit, the Government put into place a new

functional system and from that year, we have had

Recognizing that education of professionals was the key to

activists had, from the beginning, conducted educational

programmes. After several trials with courses of two, four

and six weeks, the six week courses in Palliative Medicine

and Nursing started by PPCS became widely popular and has

been replicated in several institutions in the country. A oneyear

institutions, though none had the approval of the Medical

and Nursing Councils of India.

bore fruit in 2010, when the Medical Council of India

accepted palliative medicine as a medical specialty and

announced a postgraduate course in the subject.

Subsequently, in 2012, the first Doctor of Medicine (MD)

course was started at the Tata Memorial Hospital in Mumbai

with two places per year. Unfortunately, most of the

palliative care service available at this time was in the

charitable sector, and there are not many academic

institutions with the capacity to start palliative care courses.

Designation of the Institute of Palliative Medicine at

Calicut, Kerala, as a WHO Collaborating Centre for

Care in 2010 and of Pallium India's Trivandrum Institute of

Palliative Sciences (TIPS) as a WHO Collaborating Centre for

In 2013, following his attendance of a side-event held at

the World Health Assembly in Geneva organized by Human

Rights Watch and others, the Principal Secretary of Health

of Government of India, Mr Keshav Desiraju, called a

meeting to create a palliative care strategy for the country's

activists worked together to create this strategy, the

National Program in Palliative Care (NPPC), which was

declared in 2012. Unfortunately, the proposed budget

allocation did not materialize and hence, the implemented

programme, with about 2% of the originally proposed

budget, some money being allocated to a minority of states

by the Government of India for implementing some of the

parts of the NPPC.

Pallium India found the resources and organized a working

group to create an implementation framework for NPPC,