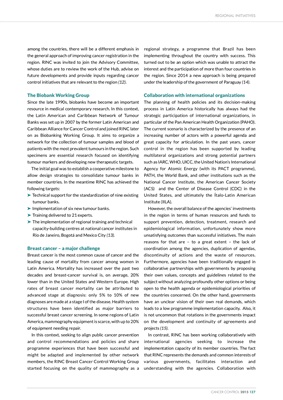 among the countries, there will be a different emphasis in

the general approach of improving cancer registration in the

region. RINC was invited to join the Advisory Committee,

whose duties are to review the work of the Hub, advise on

control initiatives that are relevant to the region (12).

Since the late 1990s, biobanks have become an important

resource in medical contemporary research. In this context,

the Latin American and Caribbean Network of Tumour

on as Biobanking Working Group. It aims to organize a

network for the collection of tumour samples and blood of

patients with the most prevalent tumours in the region. Such

The initial goal was to establish a cooperative milestone to

member countries. In the meantime RINC has achieved the

‰ Technical support for the standardization of nine existing

‰ The implementation of regional training and technical

Breast cancer is the most common cause of cancer and the

leading cause of mortality from cancer among women in

Latin America. Mortality has increased over the past two

decades and breast-cancer survival is, on average, 20%

lower than in the United States and Western Europe. High

rates of breast cancer mortality can be attributed to

advanced stage at diagnosis: only 5% to 10% of new

diagnoses are made at a stage I of the disease. Health system

structures have been identified as major barriers to

successful breast cancer screening. In some regions of Latin

America, mammography equipment is scarce, with up to 20%

In this context, seeking to align public cancer prevention

programme experiences that have been successful and

started focusing on the quality of mammography as a

regional strategy, a programme that Brazil has been

implementing throughout the country with success. This

interest and the participation of more than four countries in

the region. Since 2014 a new approach is being prepared

under the leadership of the government of Paraguay (14).

The planning of health policies and its decision-making

process in Latin America historically has always had the

strategic participation of international organizations, in

The current scenario is characterized by the presence of an

increasing number of actors with a powerful agenda and

great capacity for articulation. In the past years, cancer

control in the region has been supported by leading

such as IARC, WHO, UICC, the United Nation's International

Agency for Atomic Energy (with its PACT programme),

PATH, the World Bank, and other institutions such as the

(ACS) and the Center of Disease Control (CDC) in the

However, the overall balance of the agencies' investments

in the region in terms of human resources and funds to

reasons for that are - to a great extent - the lack of

coordination among the agencies, duplication of agendas,

discontinuity of actions and the waste of resources.

Furthermore, agencies have been traditionally engaged in

collaborative partnerships with governments by proposing

their own values, concepts and guidelines related to the

subject without analyzing profoundly other options or being

open to the health agenda or epidemiological priorities of

the countries concerned. On the other hand, governments

have an unclear vision of their own real demands, which

leads to a low programme implementation capacity. Also, it

is not uncommon that rotations in the governments impact

on the development and continuity of agreements and

In contrast, RINC has been working collaboratively with

international agencies seeking to increase the

implementation capacity of its member countries. The fact

that RINC represents the demands and common interests of

understanding with the agencies. Collaboration with