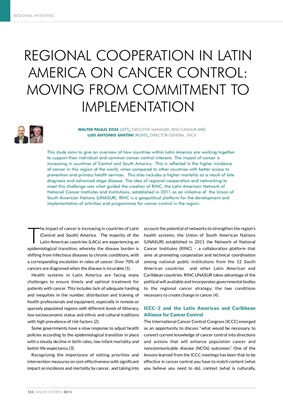 he impact of cancer is increasing in countries of Latin

(Central and South) America. The majority of the

shifting from infectious diseases to chronic conditions, with

a corresponding escalation in rates of cancer. Over 70% of

cancers are diagnosed when the disease is incurable (1).

Health systems in Latin America are facing many

challenges to ensure timely and optimal treatment for

patients with cancer. This includes lack of adequate funding

and inequities in the number, distribution and training of

health professionals and equipment, especially in remote or

with high prevalence of risk factors (2).

Some governments have a slow response to adjust health

policies according to the epidemiological transition in place

with a steady decline in birth rates, low infant mortality and

Recognizing the importance of setting priorities and

intervention measures on cost-effectiveness with significant

impact on incidence and mortality by cancer, and taking into

account the potential of networks to strengthen the region's

(UNASUR) established in 2011 the Network of National

among national public institutions from the 12 South

American countries and other Latin American and

to the regional cancer strategy; the two conditions

necessary to create change in cancer (4).

ICCC-2 and the Latin American and Caribbean

as an opportunity to discuss "what would be necessary to

and actions that will enhance population cancer and

noncommunicable disease (NCDs) outcomes". One of the

lessons learned from the ICCC meetings has been that to be

effective in cancer control you have to match content (what

you believe you need to do), context (what is culturally,

MOVING FROM COMMITMENT TO

to support their individual and common cancer control interests. The impact of cancer is

increasing in countries of Central and South America. This is reflected in the higher incidence

of cancer in this region of the world, when compared to other countries with better access to

prevention and primary health services. This also includes a higher mortality as a result of late

diagnosis and advanced stage disease. The idea of regional cooperation and networking to

meet this challenge was what guided the creation of RINC, the Latin American Network of

National Cancer Institutes and Institutions, established in 2011 as an initiative of the Union of

South American Nations (UNASUR). RINC is a geopolitical platform for the development and

implementation of activities and programmes for cancer control in the region.