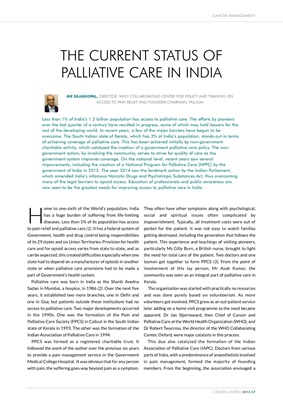 ome to one-sixth of the World's population, India

has a huge burden of suffering from life-limiting

to pain relief and palliative care (1). It has a federal system of

of its 29 states and six Union Territories. Provision for health

care and for opioid access varies from state to state, and as

can be expected, this created difficulties especially when one

state had to depend on a manufacturer of opioids in another

state or when palliative care provisions had to be made a

Palliative care was born in India as the Shanti Avedna

years, it established two more branches, one in Delhi and

one in Goa; but patients outside these institutions had no

in the 1990s. One was the formation of the Pain and

Palliative Care Society (PPCS) in Calicut in the South Indian

state of Kerala in 1993. The other was the formation of the

Indian Association of Palliative Care in 1994.

PPCS was formed as a registered charitable trust. It

followed the work of the author over the previous six years

to provide a pain management service in the Government

Medical College Hospital. It was obvious that for any person

with pain, the suffering goes way beyond pain as a symptom.

They often have other symptoms along with psychological,

impoverishment. Typically, all treatment costs were out of

pocket for the patient. It was not easy to watch families

getting destroyed, including the generation that follows the

patient. This experience and teachings of visiting pioneers,

the need for total care of the patient. Two doctors and one

layman got together to form PPCS (3). From the point of

involvement of this lay person, Mr Asok Kumar, the

community was seen as an integral part of palliative care in

The organization was started with practically no resources

and was done purely based on volunteerism. As more

volunteers got involved, PPCS grew as an out-patient service

later adding on a home visit programme as the need became

apparent. Dr Jan Stjernsward, then Chief of Cancer and

Palliative Care at the World Health Organization (WHO), and

Dr Robert Twycross, the director of the WHO Collaborating

Center, Oxford, were major catalysts in this process.

This duo also catalyzed the formation of the Indian

parts of India, with a predominance of anaesthetists involved

in pain management, formed the majority of founding

members. From the beginning, the association envisaged a

THE CURRENT STATUS OF

MR RAJAGOPAL, DIRECTOR, WHO COLLABORATING CENTRE FOR POLICY AND TRAINING ON

Less than 1% of India's 1.2 billion population has access to palliative care. The efforts by pioneers

over the last quarter of a century have resulted in progress, some of which may hold lessons for the

rest of the developing world. In recent years, a few of the major barriers have begun to be

overcome. The South Indian state of Kerala, which has 3% of India's population, stands out in terms

of achieving coverage of palliative care. This has been achieved initially by non-government

charitable activity, which catalysed the creation of a government palliative care policy. The nongovernment

action, by involving the community, serves to strive for quality of care as the

improvements, including the creation of a National Program for Palliative Care (NPPC) by the

government of India in 2012. The year 2014 saw the landmark action by the Indian Parliament,

many of the legal barriers to opioid access. Education of professionals and public awareness are

now seen to be the greatest needs for improving access to palliative care in India.