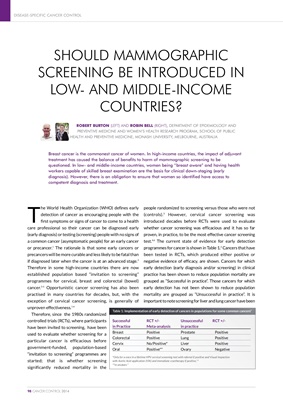 shown to be efficacious in at least one RCT, but these screening

tests have thus far not been shown to be effective in practice.

It is most important to note that the Papanicolaou (Pap)

smear screening test for cervical cancer has been used very

successfully in practice in many countries that have

screening.6 Most importantly, in contrast to breast cancer

screening, which is secondary prevention, the Pap smear

screening test detects cancer precursors that can be

However, a "once in a lifetime" Pap smear was not efficacious

in the only reported RCT in which it has ever been tested. This

HPV virus test of cervical cells versus VIA, followed by

and treatment, versus an observation only arm (controls).8

Only those women screened with the HPV test had a

Breast cancer, with 1.7 million new cases, 12% of all global

potentially fatal cancer of women and its incidence has been

10 There is currently at least

between countries with the lowest (east and southern Africa)

and countries with the highest (Western Europe, North

America and Australia/New Zealand) rates. Furthermore, it is

potentially one of the most curable of cancers. However, fiveyear

seven-fold range based on analysis of data from cancer

Asian: Korea, Japan, Australia and New Zealand. After being

on a plateau for decades breast cancer mortality began falling

in a number of those countries about 1990, although in some

These declines in breast cancer mortality have mainly

occurred in countries where either or both of two

immediately after the primary surgical treatment

Early breast cancer is defined by the Early Breast Cancer

breast cancer that can all be removed surgically".

EBCTCG have, since 1988, been publishing five-yearly

for breast cancer and advised in 2005 that "allocation to

about six months of anthracycline-based poly-chemotherapy

reduces the annual breast cancer death rate by about 38%

those aged 50-69 years; and that for ER-positive disease

only, at any age, allocation to about five years of adjuvant

31%. These effects were each seen irrespective of other

At the end of the twentieth century the message was clear:

in countries with a significant breast cancer burden that also

had a sufficient level of resources, implementing a

years by about 25%. This is well covered in the WHO

monograph on breast cancer screening.3 Most importantly, all

the RCT, which are the basis for this recommendation3 were

completed at a time when few women received adjuvant

endocrine and/or chemotherapy (adjuvant therapy) that can

Lancet and New England Journal of Medicine have published 24

articles or communications debating the value of breast

women for an earlier and more treatable form of a potentially

fatal disease like breast cancer should reduce all-cause and

has intrinsic harms (see later). However, this will not occur if

screening is ineffective because it is opportunistic/ad-hoc or

population-based but poorly organized with low

participation. Screening will also fail if the treatment of the

disease at early and later stages improves so that earlier

cases, 12% of all global cancers, and

women and its incidence has been