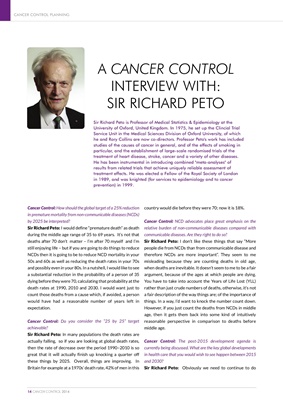 things that reduce the probability of death before middle

of accidents and violence. Having said that, there is a lot that

can be done to reduce the incidence of, and to improve the

I think that it will be important to keep cancer registration

going because the circumstances of the different registries

around Africa are quite different. It has taken a long time to

very different from the rates seen among black Amercians in

the United States. And so it will be important to continue to

monitor what the real evidence is on cancer incidence rates

We need treatments that work to be affordably available,

and used. In some cases this involves surgery and services

limited number of drugs that are out of patent and work. For

inhibitors are out of patent.

My first target on medication for reducing NCDs would be

secondary prevention: people who have actually got some

disease. How do we get drugs that work affordably available

and used for the treatment of people with disease?

Remember, you're not medicalizing the population; these are

people that have already got the disease, they have come to

you. Their absolute risk of things going wrong is quite high

so their absolute benefit per thousand treated is much

greater than in primary prevention. They are motivated to

comply with medication yet we are getting dismally low

rates of usage worldwide of drugs that should be available as

low cost generics. If you want to get death rates down

reasonably soon, then secondary prevention needs to be

really thought about. What are the logistic problems in

getting approved drug lists? What are the problems with

getting things available at low cost?

But if you really want to do something about noncommunicable disease, then tobacco is just enormous.

Cancer Control: People are also beginning to talk about "the end

where tobacco sales are rising rapidly. Over the last 14 years

in China you have had a 25% increase in tobacco. There are

three things that we could do to reduce premature mortality

There ought to be a substantial increase in taxation on the

number of cigarettes sold. The best example of this is France.

cigarettes so there was a 200% increase in price.

Consumption halved and the French government take from

Euros. So my slogan would be: Triple - Half - Double: triple

your price, halve the consumption and double the amount of

When China tried to increase prices a few years ago they

put the price increase only on the high cost brands; the

cheaper brands - which were the majority - didn't change in

price at all. If you can't afford the increased price of the high

price brands you go down to a cheaper brand, so it didn't

reduce sales. Whereas if you can put all cigarette prices up,

including the cheapest, then it does have an effect on sales.

China gets 10% of the government tax take from tobacco so

China could do for non-communicable disease because

Chinese men are 8% of the world's population and smoke a

third of the world's cigarettes.

2050 rather than whether kids start. If we want to talk

about tobacco deaths then they are going to be driven

mainly by whether adults have stopped smoking. It does

matter whether kids start smoking but that relates to the

deaths in the second half of the century. Also, plain

packaging: the tobacco industry is not at all happy when you

try to impose plain packaging or advertising bans. They hate

that, so I am inclined to trust them in that. I think plain

As well as doing something about the tobacco epidemic, we

ought to be monitoring how it is going. The hazard per

smoker will change over decades and we need to have an

population. I would argue for countries including in their

death registration processes a new question: "Was the dead