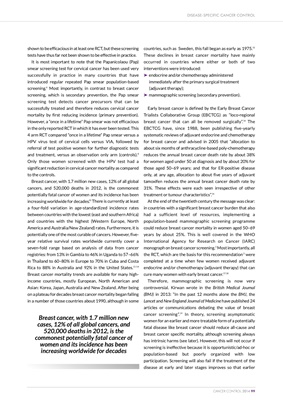 diagnosis by screening has a diminishing impact on

mortality.20 This may now be the case for breast cancer, where

early disease whether it is diagnosed clinically or by

The analytic techniques that are used to evaluate

also controversial. The advice of WHO-IARC is that

not be used; they were used extensively in a review of

WHO advice is important, and echoes earlier cautions

published in the BMJ: "that confounding and selection bias

often distort the findings from observational studies and that

there is a danger that meta-analyses of observational studies

It is increasingly apparent that over-diagnosis of in situ and

invasive breast cancers, which would never have troubled

women in their lifetimes, is substantial and has been

estimated in a meta-analysis as being 52% of women

diagnosed by screening27, although published estimates of

finding biological forms of a disease that will never cause

clinical disease. This leads to unnecessary investigations and

unnecessary treatment, so the ratio of mortality reduction

(benefit) to over-diagnosis (harm) consequent upon

mammographic screening for breast cancer in some

countries may now be unfavourable. Evaluations of

mammographic screening programmes that report on overdiagnosis must make

an estimate of the lead time from

screening. It has been reported that modelling generally

Therefore estimates of over-diagnosis that come from

modelling studies should be viewed with caution.

Today, the dilemma in countries with mammographic

screening programmes is whether the, at most, modest

benefits of mammographic screening are now outweighed by

the harms of over-diagnosis.31 In particular, one of the

advertised benefits of mammographic screening has been

that it detects small breast cancers which can be treated by

partial mastectomy and radiotherapy and so preserves the

breast.20 Unfortunately, it is now apparent that external beam

radiotherapy, which is the usual mode of administering

radiotherapy to the breast after breast-conserving surgery,

can later cause cancer of the lung and/or accelerated

predisposing to myocardial infarction, since both the lungs

and heart lie just a few centimetres beneath the breasts.

Therefore, more women treated with radiotherapy in this

way may die from these complications than avoid death from

breast cancers detected by screening.20,32 It is important to

emphasize that studies of mammographic screening, which

do not measure all-cause mortality as well as breast cancerspecific mortality,

will not detect these lung cancer and

myocardial infarct deaths and therefore give a spurious

picture of the benefits of screening.32

The balance of benefits and harms for mammographic

screening is critical in low- and middle-income countries,

a premenopausal disease, with most women diagnosed with

breast cancer at less than 50 years of age.

mammographic screening is more sensitive in

postmenopausal women, who have less dense breasts than

compared with high-income countries, many more women will

have to be screened in low- and middle-income countries to

detect one breast cancer.1 For example, it has been calculated

that in a low- or middle-income country where the incidence

be invited for screening at the cost of more than 41,000 visits

for mammography and more than 4,000 false-positive

diagnoses, in order to prevent one death from breast cancer

1This should give pause for thought

screening in low- and middle-income countries.

In the United States, where the incidence of breast cancer

is one of the highest worldwide34, the cost effectiveness

of mammography has been estimated to be $US

though a mammogram may be cheaper to deliver in a lowand middle-income country,

because of the sensitivity and

incidence issues described above, when compared with a

high-income country, the cost-effectivenss of mammography

in a low- and middle-income country may be worse.

Finally, there has only been one mammographic screening

RCT reported for a non-European-derived population which

was carried out in Singapore, where a low participation rate

amongst Chinese women resulted in selection bias in favour

of women of higher socioeconomic status and education in

the screened group and no mortality outcomes were

The debate about the balance of benefits and harms of

mammographic screening has important implications for all