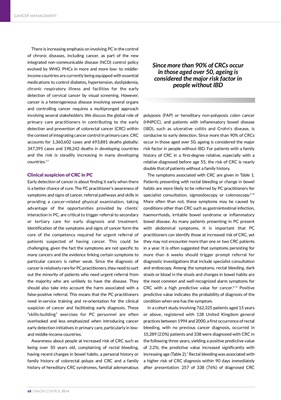 occurred within 3 months from the bleeding episode.9 Given

the fact that rectal bleeding affects 8-20% of the population

the characteristics of the bleeding requires attention:

painless bleeding or dark blood mixed with faeces are

evidence indicates that a combination of rectal bleeding, with

change in bowel habits, or one of these symptoms in persons

aged 60 and above should prompt urgent referral.8,10 A recent

with high positive predictive value for CRC diagnosis.11 Other

doubles the likelihood of a CRC diagnosis and, in contrast,

other symptoms in isolation have very low predictive value

Symptoms of CRC differ depending on the location of the

tumour, from proximal to distal bowel. Those presenting with

proximal cancers may present without changes in bowel

habits, as the highly liquid stool may pass easily around even

large masses. Patients with cancers of the sigmoid and

rectum may pass bright red blood in stools which might be

mistaken by the patient as bleeding from haemorrhoids.

Difficulty on defecation or constipation can result from the

mass effect of tumours in the distal colon where the

stool is more bulky and unable to pass.

Early detection tests for CRC include the chemical

FOBT and DRE are feasible in PC, whereas the other

procedures can only be done in specialized services at

with a lubricated, gloved finger. Although a DRE is

often included as part of a routine physical

examination, when patients complain of rectal bleeding or

other abdominal symptoms, it is not recommended as a

stand-alone test for CRC. This simple test, which is not

rectum. By itself, however, it is not a good test for detecting

CRC because its reach is limited and negative DRE does not

exclude CRC. A small amount of stool in the rectum when

doing a DRE is used by some general practitioners for cFOBT

or iFOBT. However, simply checking the stool obtained in this

fashion for bleeding with an FOBT is not an acceptable

method of early detection of CRC as the stool collected has

not recently transited through the colon and, therefore, is not

a representative sample of faeces. Research has shown that

this type of FOBT will miss more than 90% of CRC and polyps.

All patients with bright red blood in the stool should undergo

a DRE to assess if haemorrhoids are present. Any blood in the

stool in the absence of haemorrhoids should prompt an

Early detection tests such as FOBT could help general

practitioners in the early diagnosis of CRC. Such tests,

especially the iFOBT, should be accessible for PC

practitioners. The iFOBT is an early detection test that

detects occult (hidden) blood in the faeces. This test reacts

with globin, which is part of the human haemoglobin protein

Table 2: Frequency of colorectal cancer (CRC) among people with rectal bleeding in a cohort study in the United Kingdom

Age group Number of people with a People with CRC, diagnosed within Positive predictive

‰ Blood in stools, from bright red (more distal tumours) to dark and

‰ A persistent change in bowel habits, such as diarrhoea, increased

frequency of stools, constipation or narrowing of the stool that lasts

relieved by doing so.

‰ Feeling of incomplete evacuation after defecation.

‰ Inability to pass stools for a prolonged period of time (e.g. 1 week).