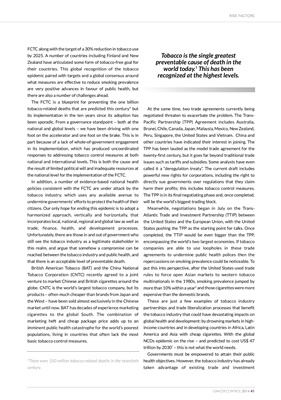 agreements to oppose governments' efforts to protect the

health of their citizens. For example, Philip Morris

warnings and restrictions on cigarette packages under the

Uruguay. Given such actions, negotiators of the TPP and TTIP

must seriously consider the advice of civil society advocates

to exempt tobacco from the final agreements. Governments

must ensure that trade and investment agreements are not

used to undermine their public health policies, including

lives, especially in developing countries vulnerable to the

If the global community is serious about implementing

strategies to tackle the tobacco epidemic, there is another

With less than two years until the current UN Millennium

discussing what development goals they should be trying to

which will determine a new set of sustainable development

leaders about their health commitments and the need to

focus on reducing the global toll caused by tobacco. Tobacco

was left out of the MDGs. This was a missed opportunity to

raise awareness amongst policy-makers about the tobacco

epidemic and it limited the development resources that were

devoted to implementing the tobacco control measures in the

FCTC. However, the SDGs will focus on sustainable

development, and given that tobacco use impacts nearly all

areas of sustainable development - including health,

reduce tobacco prevalence should be a key strategy to

The groundwork has been laid. United Nations Member

priority by including in the SDGs, under an overarching health

goal, the World Health Assembly target of a 30% relative

reduction in tobacco prevalence by the year 2025.

Implementing the FCTC's measures would be the next step.

These include increasing the price of tobacco products,

In 2003, the world's governments were unanimous in their

decision to confront the tobacco epidemic by adopting the

WHO FCTC. Unfortunately, that decision has not been

universally implemented by governments and via

intergovernmental processes. It is well past time that it was,

and that stakeholders stopped recognizing "Big Tobacco" as

just another industry and started seeing it for what it truly is:

the vector for the world's Number One cause of preventable

undermining the progress made in global development over

If governments are willing to exempt tobacco out of trade

agreements, address the tobacco epidemic as a key

and accelerate the implementation of the FCTC, it is very

and save hundreds of millions of lives. l

Laurent Huber, MS Ed is the Director of the Framework

Convention Alliance, a coalition of over 350 non-governmental

organizations in over 100 countries, widely recognized for its

vital role in shaping the WHO Framework Convention on

Tobacco Control, and the Director of Action on Smoking and

Laurent holds a Master's of Science and has directed a

number of nonprofit organizations that addressed the

3. The World Health Organization. Global Health Risks. WHO Mortality and burden of

5. The International Labour Organization conventions on child labour are available from:

information on international conventions on child labour is available from: