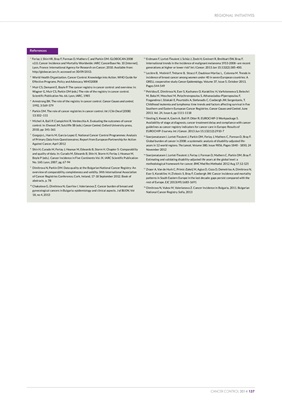 The political declaration of the High-level Meeting on

the Prevention and Control of Non-communicable

Diseases that was adopted by the UN General

Assembly as Resolution 66/2 at its third plenary meeting on

19 September 2011 placed a strong emphasis on the need to

1). This emphasis reflected the

growing recognition that very few of the social determinants

of health can be directly influenced by health care

approach is required that addresses NCDs and

ensures that health-related considerations are taken into

A high proportion of patients presenting with advanced

cancers in developing countries may be largely due to the

lack of knowledge (public, professional and political) about

the early signs of cancer, to the lack of local and regional

infrastructure, poverty and the high cost of treatments but a

further reason is also the recurrent cost of journeys to

distant centres for treatment. India has a long running

scheme that helps defray the rail travel costs of cancer

patients and their carers attending hospital for treatment.

Cancer Control invited the Ministry of Railways in India to

provide the following description of its concessionary fare

scheme as an example of an established multisectoral

among which lower class travel is one of the most inexpensive

system and the largest

kilometres, Indian Railways has also been discharging a critical

obligation manifests itself, among other things, in the form of

concessions extended to various travellers which include

and agricultural workers), war-widows and people with lifethreatening diseases. The travel

discharge their social obligations entirely on a voluntary basis.

Background to concessions for cancer patients

In post-independence India, travel concessions were

introduced in the early 1950s for students and kisans with the

Available records show that the concession for cancer

patients was first introduced in 1957. The concession offered

Access to cancer care is not just about affordable medicines and treatment facilities, it can

also be about removing physical barriers to receiving treatment. For increased early

detection and the problems of late presentation, lowering the cost of travel for patients and

their carers can be a constructive initiative. Since 1957, the Ministry of Railways in India has

beneficial and evolved with new features over the decades. This is a practical, and

copyable, example of a multisectorial approach to cancer care.