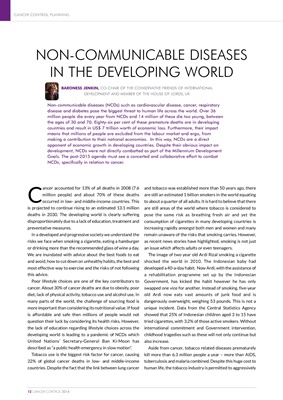 market tobacco in many parts of the developing world. Due

to a distinct lack of tobacco control policies and little

awareness of the health effects, they often target women

and children and distribute free cigarettes at sports and

countries and the industry exerts enormous influence over

the presiding governments. According to the Bill & Melinda

Gates Foundation, if current trends are allowed to continue,

and 80% of these will be in low- and middle-income

countries. Governments should be encouraged to introduce

strong restrictions on the tobacco industry and convince

them of the economic benefits of tobacco taxes.

economic change they are likely to become "westernized".

This westernization effect can lead to a reduction in

infection-related cancers but can also contribute to an

increase in cancers associated with behavioural and lifestyle choices. In short, we run the risk of replacing old health

challenges such as a lack of food and shelter with new

western health risks such as poor diet and smoking. As diets

and lifestyles become more westernized, the risks of cancer,

and other NCDs such as diabetes and cardiovascular

disease, may also rise. On a visit to Sierra Leone last year, I

was struck by the fact that the closer we got to Freetown,

from the remote Guinea border where people were fit and

lean, that people, who were eating junk food from stalls in

the street, became noticeably fatter as we approached the

moving rapidly towards obesity with all the added health

risks that, as we in the west know, pose massive problems in

the future. We must offset this with a clear agenda aimed at

educating populations about the risks of certain choices, just

as we do with our own nationals. Now, as westernization

begins to take hold, is the last opportunity to educate

populations and prevent habits from developing.

Whilst we should not neglect the fact that much of the

developing world is very young, the world's population is

also ageing. The world median age is expected to reach 38

to almost triple to 2 billion by 2050. Whilst there is currently

a large gap between age expectancies in the developed and

Afghanistan and Zimbabwe, the rapid development we are

seeing in many countries will mean that populations grow

and live longer. Cancer, and most other NCDs, are

predominantly diseases of the elderly and ageing is a

fundamental factor in the development of cancerous cells.

As people in the developing world start to see longer lifespans due to development,

the incidence of NCDs will rise.

As well has threatening the lives of millions of people and

the social development of the developing world, NCDs

clearly pose a high risk to economic development. A recent

report co-authored by the Harvard School of Public Health's

David Bloom, estimated the cumulative loss of output to the

healthy life were lost globally because of cancer alone. In

areas of the world that are desperately trying to increase

pressures, this situation quite simply cannot be allowed to

Since the introduction of the Millennium Development

Goals we have seen the number of people living in poverty

across the world halve, deaths from malaria have fallen by

one quarter and child deaths have fallen by 30%. The global

community, and Britain in particular, has much to be proud

of. However, challenges still remain and as we look towards

the post-2015 agenda, which the UK Prime Minister David

Cameron is spearheading, I firmly believe that we must look

closely at the impact of NCDs in the developing world.

The mortality and diseases burden from NCDs will

continue to increase if they are not addressed imminently.

The knowledge and vision exists to take the necessary action

but it requires the commitment of the international

community. Cancer can be reduced and controlled with

If detected early, and treated adequately, cancers have a

under-funded and have been left off the development

agenda. To this end, I hope that these matters will be fully

debated over the next year and that consideration will be

given to entrench measures to combat NCDs into the post2015 agenda. l

Baroness Jenkin of Kennington is co-Chair of the Conservative

Friends of International Development and is active in a number

of development-related All Party Parliamentary Groups. She is

Development. She has been a Conservative Peer in the UK