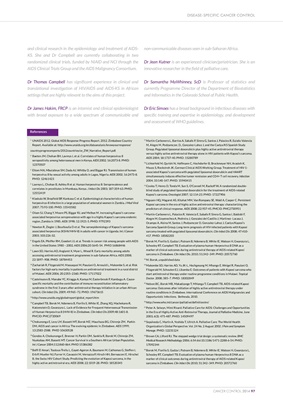 detection of cancer as encouraging people with the

first symptoms or signs of cancer to come to a health

care professional so their cancer can be diagnosed early

(early diagnosis) or testing (screening) people with no signs of

a common cancer (asymptomatic people) for an early cancer

or precancer.1 The rationale is that some early cancers or

if diagnosed later when the cancer is at an advanced stage.2

Therefore in some high-income countries there are now

established population based "invitation to screening"

3-5 Opportunistic cancer screening has also been

practised in many countries for decades, but, with the

exception of cervical cancer screening, is generally of

Therefore, since the 1980s randomized

have been invited to screening, have been

used to evaluate whether screening for a

particular cancer is efficacious before

"invitation to screening" programmes are

started; that is whether screening

significantly reduced mortality in the

people randomized to screening versus those who were not

(controls).3 However, cervical cancer screening was

introduced decades before RCTs were used to evaluate

whether cancer screening was efficacious and it has so far

proven, in practice, to be the most effective cancer screening

test.4,6 The current state of evidence for early detection

programmes for cancer is shown in Table 1.

been tested in RCTs, which produced either positive or

negative evidence of efficacy, are shown. Cancers for which

practice has been shown to reduce population mortality are

grouped as "Successful in practice". Those cancers for which

early detection has not been shown to reduce population

mortality are grouped as "Unsuccessful in practice". It is

important to note screening for liver and lung cancer have been

SCREENING BE INTRODUCED IN

Breast cancer is the commonest cancer of women. In high-income countries, the impact of adjuvant

questioned. In low- and middle-income countries, women being "breast aware" and having health

diagnosis). However, there is an obligation to ensure that women so identified have access to

Table 1: Implementation of early detection of cancers in populations for some common cancers

with Acetic Acid application (VIA) and immediate cryotherapy if positive.