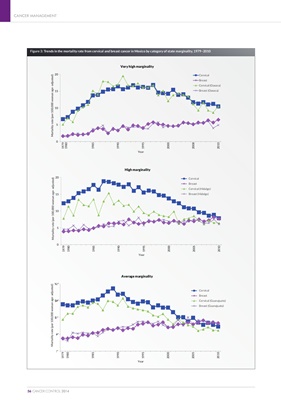 Figure 3: Trends in the mortality rate from cervical and breast cancer in Mexico by category of state marginality, 1979-2010 continued

Notes: These data are aggregated according to the index of deprivation (marginality) developed and maintained by the National Population Council. Mexico's five-category deprivation index

differentiates the 32 states (federal entities) and municipalities according to the proportion of the population with low levels of education, residence in inadequate dwellings (without drainage,

emerge as a major cause of mortality within these same

populations. Future increases in life expectancy, as well as in

the prevalence of risk factors related to the adoption of

western lifestyles, will affect the incidence of women's

cancers in low- and middle-income countries.40 Even modest

(reductions in the number of children, reduced age at

menarche and increases in age at first birth and nutrition

(obesity) - factors that are associated with increased

economic and social development and improvements in the

situation of women and are hence not easily reversible - can

translate into substantial increases in the breast cancer

burden in these countries.41 Moreover, breast cancer is also

risk factors and to maximize protective factors such as good

breast-feeding practices42 are important for reducing

population-level breast cancer risk and these should be

further studied and evaluated. These interventions will at the

While primary prevention can help to curb the rise in

breast cancer incidence,43 the effects will not be felt for

several decades. In the case of breast cancer, the few known,

population-based, preventive interventions must be