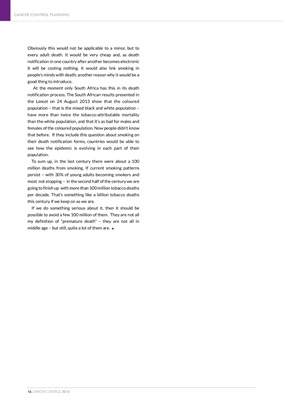 Assembling the evidence for NCD action

The World Health Organization (WHO) has estimated that, of

Asia and the Eastern Mediterranean region.

With the scale of the burden and its rapid spread globally,

WHO has been raising awareness on the need to place a

higher priority on NCDs. This culminated in the World Health

Assembly on 27 May 2013 during which the Ministers of

Health of 194 countries adopted the Global Action Plan for

Prevention and Control of NCDs.2 WHO has, therefore, the

agencies (including the International Agency for Research on

Cancer [IARC]) and other relevant public and private

stakeholders to address the prevention of NCDs. WHO has

engaged in establishing a set of voluntary global targets,

including a 25% relative reduction of premature mortality

was chosen because many high-income countries achieved

improvements of that size in premature NCD mortality in the

last decade or two. A Global Monitoring Framework including

25 indicators (Figure 2) has been established to assess

progress in the implementation of national strategies and

The causes of the rising NCD burden

The second part of the twentieth century witnessed

enormous progress in improving health and survival around

the world. Average life expectancy at birth rose from 48 years

longevity and slow declines in fertility has led to a rapid

growth and ageing of the world's populations, particularly in

low- and middle-income countries. The transformation in the

scale of the NCD burden arises from such demographic, as

malnutrition and pandemics of infection (such as TB and

malaria) has brought about a reduction in deaths from

communicable diseases. That NCDs have displaced

communicable diseases as the major cause of death is also

linked to higher average life expectancy and an increasing

lifestyles, most notably in countries transiting towards higher

levels of human development. They include a rising

prevalence of smoking, overweight and obesity, and physical

COUNTRIES: THE CASE OF

SILVIA FRANCESCHI AND FREDDIE BRAY, INTERNATIONAL AGENCY FOR RESEARCH ON

Non-communicable diseases (NCDs) are increasing, especially in low- and middle-income

countries. The number of new cancer cases is predicted to rise to over 20 million worldwide by

2025. These trends represent major challenges for sustainable development and are now being

Cancer (IARC) through the Global Action Plan against NCDs. Reductions in smoking, alcohol

vaccination against HBV and HPV and screening, can also be