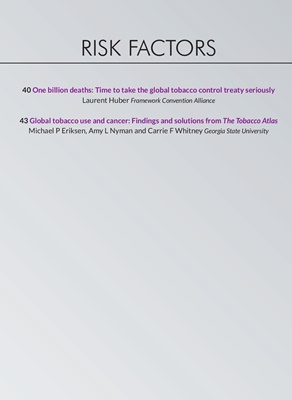 Tobacco is unique. It is the only consumer product that,

when used exactly as intended, kills its consumers.

The World Health Organization (WHO) estimates

that 1 billion people will die this century if action is not taken.

Currently, about 6 million people per year are killed by

tobacco, and most of these deaths occur in low-income

countries, where many people are already at risk from other

deaths will be in low- and middle-income countries and that

in every region of the world, lower-income groups are more

likely to use tobacco.2

Not only is tobacco the second leading health risk factor

, but it also robs families

of financial resources that would otherwise go toward

heightens poverty within households and reduces

productivity at the national level. Having a tobacco-related

disease will hinder the main wage earner's ability to work,

which in turn reduces household wages and drives the family

woodland areas in low-income countries that have high

population densities and that are experiencing high

nutrients at a much faster rate than other crops.4 It can also

impoverish some tobacco farmers who find themselves in

trapped in a vicious circle of debt, resulting in poverty or

situations where children as young as five years of age are

Tobacco is the single greatest preventable cause of death in

the world today.1 This has been recognized at the highest

levels. The global community responded vigorously to the

public health treaty, the WHO Framework Convention on

later, we are starting to see the fruits of the FCTC in a number

of countries. In 2011, the second-ever United Nations health

diseases (NCDs*), for which tobacco is a leading risk factor,

which calls for an accelerated implementation of the FCTC.

As a consequence, the World Health Assembly has adopted a

Global Action Plan for the prevention and control of NCDs

which also calls for an accelerated implementation of the

ONE BILLION DEATHS: TIME TO

The World Health Organization Framework Convention on Tobacco Control is the

billion deaths this century. However, implementation in the ten years since its adoption has

been sporadic, in part due to lack of whole-of-government engagement and inadequate

resources. Ending this epidemic will require a harmonized approach that incorporates local,

national, regional and global law as well as international trade, finance, health and

*The four main groups of NCDs are: cancers, cardiovascular