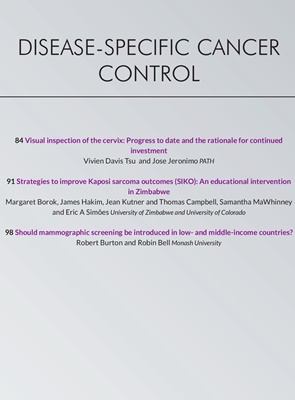 ervical cancer is a preventable neoplasia that

continues to be a public health problem in many

developing countries. The disease is associated with

very prevalent in most populations in the world.1 In 90% of

years, but in 10% of cases they persist for many years and can

evolve into precancerous lesions in either the squamous or

cervical cancer is preceded by 10 to 20 years of

intraepithelial precancerous changes3 that can be detected

and easily treated, interrupting the natural history of the

disease and preventing the death of women.

Cervical cytology (Pap smear) has been used for many

decades as the preferred screening test, and consequently

the incidence and mortality of cervical cancer have decreased

in most developed countries. However, the Pap smear has

lack of resources to properly implement it, especially

considering that Pap smear is a multi-step process that

4 For this reason the

burden of the disease affects disproportionally women from

developing countries, since they do not have proper

screening and treatment of the precancerous stages of the

The limitations of Pap smear prompted researchers to

acetic acid (VIA) was proposed and tested for primary

cervical cancer screening.5 VIA is a simple screening test

based on the principle that precancerous lesions in the

after they are exposed to 5% acetic acid (vinegar); this is the

same principle used by colposcopy since the 1920s. The

difference is that colposcopy uses a device (colposcope) that

provides special lighting and 4 to 20x magnification. Instead,

VIA evaluates the visual changes with a naked-eye inspection

demonstrated their ability to do VIA after just a week of

of the uterine cervix. It has the additional advantage of

providing a result within a few minutes, making it possible to

provide treatment (if it is available at the facility) or

In the last decade, new tests for detection of HPV have

been introduced.7-9 These new tests are highly sensitive for

VISUAL INSPECTION OF THE

CERVIX: PROGRESS TO DATE AND

THE RATIONALE FOR CONTINUED

the availability of effective preventive measures such as vaccination and screening. Visual

cervical cancer screening. Despite the advances in vaccination and more sensitive molecular

tests, there are compelling reasons for continuing and even accelerating the investment in

programmes based on VIA and precancer treatment.