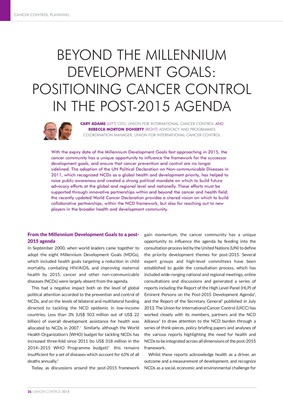 and omissions in the way that NCDs are defined and

addressed. For example, the HLP Report frames cancer and

other NCDs as an issue for high-income countries only, failing

to recognize that NCDs are a universal issue, with a

disproportionate impact on low- and middle-income

countries and vulnerable populations. While the HLP Report

use, harmful use of alcohol, physical inactivity and unhealthy

diet), the recommendations of the Sustainable Development

Solutions Network7 do not address the need for a health

systems response to NCDs, including the critical need for

technologies.8 These omissions serve as a stark reminder that

the full continuum of care for cancer is firmly positioned in

Making the case for cancer in the post-2015 agenda

Since the development of the MDGs, the cancer and NCD

community has made history by securing a UN High-Level

Meeting which adopted the UN Political Declaration on NCDs

in 2011. This Declaration recognizes that "the global burden

of and threat of non-communicable diseases constitutes one

of the major challenges for development in the twenty-first

throughout the world, and threatens the achievement of

In May 2012, a global target to reduce premature deaths

at the World Health Assembly. In 2013, the foundations of a

new global NCD architecture were put in place with the

adoption of a Global Monitoring Framework for NCDs

members and partners, welcomed the inclusion in the GMF

and GAP of cancer-specific targets, indicators and actions

including in the areas of cancer planning and surveillance,

vaccination for HPV and HBV against cervical and liver

commitments to the prevention and control of cancer,

particularly in low- and middle-income countries, signal the

readiness of governments to prioritize cancer in the global

health agenda, and recognition of the intrinsic links between

The economics of cancer

to cost US$ 290 billion, and medical costs accounting for the

income losses accounting for US$ 67 billion and US$ 69

billion respectively. The total costs are expected to rise by

cases and 55% of cancer deaths occur in low- and middleincome countries, with this percentage set to rise

proportion of these costs will hit the countries that are least

equipped to address this challenge. Even so, the staggering

risk that cancer poses to economic growth and development

is still only just starting to receive recognition through

investment in national cancer control plans, despite the fact

that we know that this risk can be managed effectively and

that a return on investment in health is possible. The World

Health Organization estimates that a basic package of costeffective

factors in low- and middle- income countries would require

an investment of only US$ 2 billion a year

, and yet less than

3% of overseas development assistance for health is

invested in cancer and other NCDs.13

Cancer and the environment

Challenges to sustainable development such as rapid

resource use patterns impact on nutritional security, and are

linked with greater exposure to cancer risk factors including

Additionally, a wide range of environmental causes of

such as asbestos and UV-radiation as well as exposure to

excessive sunlight and cancer-causing infections, together

make a significant contribution to the cancer burden.

[including cancer] is a precondition for, an

outcome of, and an indicator of all three