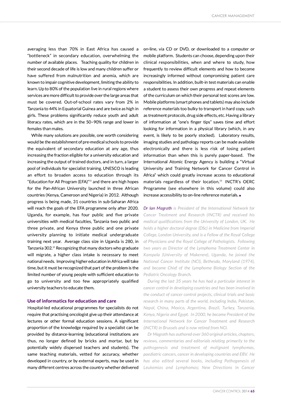 His latest volume The Lymphoid Neoplasms was published in

Systems Transformation and Sustainability; is President of the

Advisor to the Terry Fox Research Institute and is Chief Medical

He is a graduate of St Bartholomew's Hospital, London, UK in

scientific research, medical and radiation oncology in the UK,

have been held at St Bartholomew's Hospital, Princess Margaret

Hospital/Ontario Cancer Institute and the BC Cancer Agency.

He has been President and CEO of the Princess Margaret

Hospital/Ontario Cancer Institute and the BC Cancer Agency.

Foundation for Health Research (MSFHR, 2006-7) and has

served on the Boards of CPAC, MSFHR, and Genome BC. He is

an Adjunct Clinical Professor at the University of British

Columbia and an Associate Scientist with the Michael Smith

Genome Sciences Centre at the BC Cancer Agency.

Gold Medal in 2003, and the Terry Fox Award of the BC Medical

Association in 2009 for his lifetime services to cancer control.

2006. Phase I (prepared by Purvish Parikh on behalf of the Developing Countries Task

12.the Sub-Saharan study of Medical Schools.