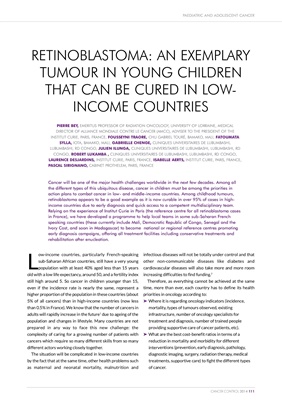 It is essential that all these priorities are broken down into

a multi-annual action plan. Many cancers in children are good

candidates to be prioritized in all developing countries3

We have chosen to define and implement a programme

rehabilitation of children with retinoblastoma in sub-Saharan

African countries" based on the following assumption shared

: "with early diagnosis, rapid care by a

higher cure rates and with less after effects".

There are different reasons for this choice:

‰ Retinoblastoma is now the most easily curable tumour as

the 10-year cure rate is more than 95% of cases in highincome countries.5

This is obtained with a relatively low

cost resources but thanks to early diagnosis and easy

access to specialized teams. But, the cure rate is still low

retinoblastoma seems to be a good candidate to

demonstrate that coordinated action is able to quickly

change the situation in low-income countries.

‰ In 2010, we had discussions with the French-African

set up by Professor Jean Lemerle 10 years ago, has

supported the establishment and the operation of 13

GFAOP, common protocols were developed by

"committees". Retinoblastoma was discussed by the

from Mali (F Traoré and F Sylla). We had meetings in

‰ The Institut Curie is the reference centre in France for

retinoblastoma care and research with a specialized

specialists and researchers). Almost all the French

managed by Curie Hospital. Many research projects are

conducted through the Curie research centre.

branch of the International Network for Cancer

Treatment and Reaserch (INCTR), is a small NGO

directed by Pierre Bey, who was a former director of the

Institut Curie Hospital, and decided in 2010 to make this

"retinoblastoma programme" one of its flagship projects.

‰ We also had the advantage through INCTR of benefitting

from the experience of Sidnei Epelman7 who developed a

‰ Financial support for this programme came from the

through the "My Child Matters" programme,

from Retinostop (a French NGO created by parents of

children with retinoblastoma, www.retinostop.org), from

the French Ministry of Health, from GFAOP and Lalla

Salma Foundation (for chemotherapy), from INCTR and

from the Institut Curie.

The existing situation of retinoblastoma in Mali was

represented 33% of the 166 solid tumours seen during

this period (while retinoblastoma represented only 4.2%

of solid tumours in children in France).

‰ The median age at diagnosis was 4.2 years (versus 2 years

‰ 60% of cases with extra-ocular extension at diagnosis (0%

in France in the last five years).

‰ 30% of patients who did not receive the entire prescribed

treatment (versus 0% in France).

We observed many reasons for this situation that were

obstacles to be overcome to improve care of children with

cancer in the developing world: poverty, other societal

over-represented in Africa due to the under-estimation of

many other deep seated tumours), lack of awareness, lack of

access to diagnosis and treatment facilities, lack of trained

staff and infrastructure problems. For retinoblastoma in Mali,

which are important reasons for parents to refuse

enucleation of the affected eye, particularly if the diagnosis is

We decided to develop the programme in Bamako because

some of the prerequisites were fulfilled:

‰ There were core skills available with a paediatric

oncology unit (in the paediatric department of Gabriel

‰ The doctors caring for children with retinoblastoma