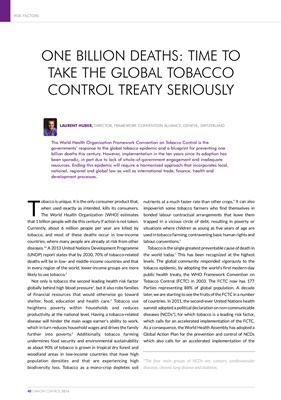 by 2025. A number of countries including Finland and New

Zealand have articulated some form of tobacco-free goal for

their countries. This global recognition of the tobacco

epidemic paired with targets and a global consensus around

what measures are effective to reduce smoking prevalence

are very positive advances in favour of public health, but

there are also a number of challenges ahead.

The FCTC is a blueprint for preventing the one billion

tobacco-related deaths that are predicted this century* but

its implementation in the ten years since its adoption has

been sporadic. From a governance standpoint - both at the

national and global levels - we have been driving with one

part because of a lack of whole-of-government engagement

in its implementation, which has produced uncoordinated

responses to addressing tobacco control measures at both

national and international levels. This is both the cause and

the result of limited political will and inadequate resources at

the national level for the implementation of the FCTC.

In addition, a number of evidence-based national health

policies consistent with the FCTC are under attack by the

tobacco industry, which uses any available avenue to

undermine governments' efforts to protect the health of their

citizens. Our only hope for ending this epidemic is to adopt a

harmonized approach, vertically and horizontally, that

incorporates local, national, regional and global law as well as

Unfortunately, there are those in and out of government who

still see the tobacco industry as a legitimate stakeholder in

this realm, and argue that somehow a compromise can be

reached between the tobacco industry and public health, and

that there is an acceptable level of preventable death.

venture to market Chinese and British cigarettes around the

globe. CNTC is the world's largest tobacco company, but its

products - often much cheaper than brands from Japan and

the West - have been sold almost exclusively in the Chinese

market until now. BAT has decades of experience marketing

cigarettes to the global South. The combination of

marketing heft and cheap package price adds up to an

populations, living in countries that often lack the most

At the same time, two trade agreements currently being

negotiated threaten to exacerbate the problem. The TransPacific

Peru, Singapore, the United States and Vietnam. China and

other countries have indicated their interest in joining. The

TPP has been lauded as the model trade agreement for the

twenty-first century, but it goes far beyond traditional trade

issues such as tariffs and subsidies. Some analysts have even

called it a "deregulation treaty". The current draft includes

powerful new rights for corporations, including the right to

directly sue governments over regulations that they claim

The TPP is in its final negotiating phase and, once completed,

will be the world's biggest trading block.

Meanwhile, negotiations began in July on the TransAtlantic Trade

and Investment Partnership (TTIP) between

the United States and the European Union, with the United

States pushing the TPP as the starting point for talks. Once

completed, the TTIP would be even bigger than the TPP,

companies are able to use loopholes in these trade

agreements to undermine public health polices then the

repercussions on smoking prevalence could be noticeable. To

put this into perspective, after the United States used trade

multinationals in the 1980s, smoking prevalence jumped by

more than 10% within a year6 and those cigarettes were more

expensive than the domestic brands.

These are just a few examples of tobacco industry

the tobacco industry that could have devastating impacts on

global health and development: by drowning markets in highincome countries and in developing

America and Asia with cheap cigarettes. With the global

NCDs epidemic on the rise - and predicted to cost US$ 47

Governments must be empowered to attain their public

health objectives. However, the tobacco industry has already

Tobacco is the single greatest

preventable cause of death in the

recognized at the highest levels.

*There were 100 million tobacco-related deaths in the twentieth