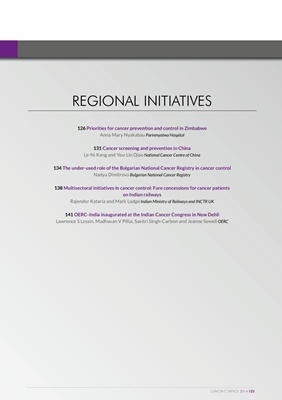 According to World Health Organization (WHO) projections,

the majority of people with cancer worldwide live in

developing countries. These countries are facing a growing

double burden of both infectious and non-communicable

diseases such as cancer.2 This is causing enormous pressure

in particular, is facing a major public health challenge due to

the rising burden of cancer.2

Africa, has a population of 12.75 million, with a life

expectancy of 54 years.3 The gross domestic product was US$

4 It is currently recovering from an

economic crisis that peaked in 2008. However, the country

has realized some encouraging successes, among which is the

This was achieved through a coordinated, multidisciplinary

for the fight against cancer. Yet another positive attribute is

the high literacy rate of >90%: amongst the highest in Africa.6

In Zimbabwe, cancer is a major cause of morbidity and

cancer deaths per year.7 Most cancers are infection-related.

The other major risk factors include unhealthy lifestyles,

cancer incidence and mortality data from the Zimbabwe

The most common cancers are cervical cancer and Kaposi

sarcoma; these are also the leading causes of cancer

mortality (Figures 1 and 2). In children, the most common

soft and connective tissue tumours and tumours of the

central nervous system.7 Analysis of data from the National

Cancer Registry showed that 60% of cancers were HIVassociated.8

Unfortunately, in Zimbabwe, like other resourcelimited countries, the majority of cancers present at an

care services is limited due to resource constraints. Another

problem is that most diagnostic, treatment and palliative care

services are centralized, so limiting access for many patients.

Cancer treatment is currently only available at two

Zimbabwe is among the top 22 countries in the world in terms of the burden of HIV.1 Many of

The focus should be on high-impact, low-cost interventions such as vaccination against

cervix. These are the most appropriate measures for resource-constrained countries such as

Zimbabwe. Furthermore, as most cancers present at an advanced stage, scaling up early

detection is a priority. Equally important, is making treatment and care available and

accessible to all patients, as opposed to the current situation whereby services are mainly

centralized. This article highlights the priorities for national cancer prevention, control and