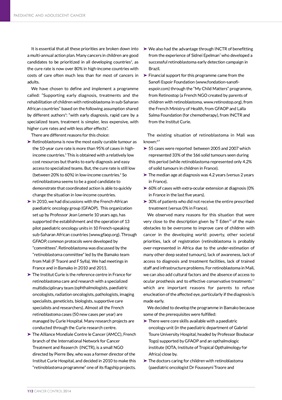 ophthalmologist Dr Fatoumata Sylla) had the

determination to change the situation with the support

of their department heads.

‰ Approval by the authorities, particularly by the ministry

of health and by the directors of the hospitals (for

‰ Improvements in early diagnosis with:

practitioners and paediatricians) and other health

personnel (nurses, midwives, technicians) on the

symptoms of retinoblastoma (leukocoria and strabism),

technicians (113 in Mali in regional hospitals and some

health centres) in the identification of suspected cases

for referral to IOTA.

designed from existing models in France and Brazil and

also through national campaigns to fight blindness on

radio and TV in French and in the Bambara language.

- An effective response at different stages of care in

developing the capacity to take rapid and effective

IOTA for children with suspected retinoblastoma with

in less than one week;

NMR imaging (when possible in Bamako);

• the possibility of surgery (enucleation) at the early

stage in less than a week;

a person on site and at the Prothelem company in

• consolidation of pathology (training of a pathologist

for paediatric oncology pathology in Paris with the

GFAOP by providing the necessary cancer drugs) and

to radiotherapy (when available in Bamako);

• the establishment and development of conservative

treatments for bilateral cases (training of an

techniques, and the acquisition of

necessary materials such as a laser) with the

possibility of follow-up under general anesthesia for

‰ Financial support for the poorest families (to limit

(beginning with epidemiological studies on the true

incidence of retinoblastoma and on the identification of

specific risk factors) through the network of reference

countries treating nearly 200 new cases per year by the

end of the programme.

‰ Systematic registration of all cases of retinoblastoma

from a common chart between paediatric oncologists and

ophthalmologists with regular evaluations according to

previously defined indicators (this was embodied in interinstitutional agreements supported by

The programme was officially launched in Bamako on 5

November 2011, during a visit from professionals including

an ophthalmologist, a radiation oncologist, a paediatric

oncologist and an ocular prosthetist. Over three days, the

programme was finalized: there were discussions with the

authorities, a course on retinoblastoma and a formal meeting