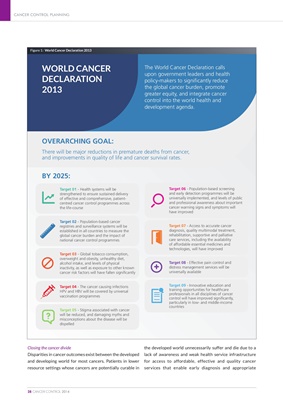 Cervical cancer is an example of the disproportionate

burden borne in the developing world. Over 85% of the

275,000 women who die every year from cervical cancer are

from developing countries. If left unchecked, by 2030 cervical

cancer will kill as many as 430,000 women, virtually all living

in low-income countries.14 The reality of cancer cure rates in

children is also reflective of the inexcusable inequities in

access to care and essential cancer medicines that occur

globally. There are an estimated 160,000 newly diagnosed

cases of childhood cancer worldwide each year15 with more

than 70% of the world's children with cancer lacking access to

effective treatment. The result is an unacceptably low

survival rate of ~10% in some low- and middle-income

countries compared to ~80% in some high-income

In many cases the largest and most unacceptable gap in

cancer care is the lack of adequate palliative care and access

to pain relief for much of the world's population. The

disparities in worldwide use of medical opioids are shocking,

Kingdom and Australia - using 68% of opioids, while lowand middle-income countries together only account for 7% of

global use.18 A short list of medications can control pain for

almost 90% of all people with cancer pain including children,

yet even where opioids are available, cost to the patient and

The evidence base from diverse countries is growing to

dispel the myth that effective, quality care is only achievable

for high-income countries, with successful cancer control and

care programmes in many low resource settings now in place

and control that can be implemented in all resource settings

and within a global development framework will not be easy.

However, by rallying around a defined set of evidence-based

targets and actions, and using these to reach out to nontraditional

partners beyond the cancer and health fields, the

cancer community can create a powerful and united

advocacy push to position cancer in the post-2015 agenda.

has helped to bring the growing cancer crisis to the attention

of government leaders and health policy-makers, and to

against cancer and other NCDs. In light of these

groundbreaking developments in the fight against NCDs,

and with the expiration of the MDGs fast approaching, UICC

saw a growing need to more closely align the Declaration

with the emerging global NCD framework and the dialogue

from UICC's members, partners and the wider health

community, an updated Declaration was developed and

launched at the World Cancer Leaders' Summit in Cape

The language used in the Declaration has been updated to

reflect current discourse in the public health and

development arenas. Other specific changes to the

‰ The timeframe for achievement of the Declaration

the GMF. Governments have already committed to take

action to reduce premature deaths from NCDs by 25%

by 2025; UICC believes the advocacy and programmatic

efforts of the cancer community will be more powerful if

we work to and support the same timeline.

‰ The text of the Declaration targets (specifically targets 1

and 7), and list of immediate actions have been enhanced

to acknowledge the importance of the quality of cancer

care and emphasize the principles of equitable access to

By more closely aligning the updated Declaration with the

community to reach out to non-traditional partners in

development, disability, education, employment and many

other sectors for innovative partnerships.

By connecting the cancer community from the grassroots

levels to national and regional cancer societies and networks

and joining forces with the larger NCD community through

the NCD Alliance, an opportunity has already been created to

The onus is now on the cancer community to build on

this momentum and continue to expand its sphere of

influence to push for national accountability for existing