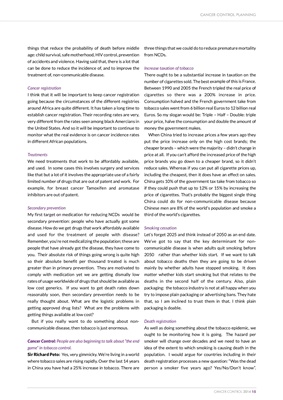 Obviously this would not be applicable to a minor, but to

every adult death. It would be very cheap and, as death

notification in one country after another becomes electronic

it will be costing nothing. It would also link smoking in

people's minds with death; another reason why it would be a

At the moment only South Africa has this in its death

the Lancet on 24 August 2013 show that the coloured

have more than twice the tobacco-attributable mortality

than the white population, and that it's as bad for males and

that before. If they include this question about smoking on

their death notification forms, countries would be able to

see how the epidemic is evolving in each part of their

To sum up, in the last century there were about a 100

persist - with 30% of young adults becoming smokers and

going to finish up with more than 100 million tobacco deaths

per decade. That's something like a billion tobacco deaths

this century if we keep on as we are.

If we do something serious about it, then it should be

possible to avoid a few 100 million of them. They are not all

my definition of "premature death" - they are not all in

middle age - but still, quite a lot of them are. l