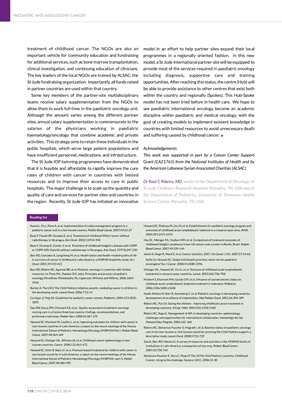 population with at least 40% aged less than 15 years

old with a low life expectancy, around 50, and a fertility index

still high around 5. So cancer in children younger than 15,

even if the incidence rate is nearly the same, represent a

higher proportion of the population in these countries (about

5% of all cancers) than in high-income countries (now less

than 0.5% in France). We know that the number of cancers in

population and changes in lifestyle. Many countries are not

prepared in any way to face this new challenge: the

complexity of caring for a growing number of patients with

cancers which require so many different skills from so many

The situation will be complicated in low-income countries

by the fact that at the same time, other health problems such

as maternal and neonatal mortality, malnutrition and

infectious diseases will not be totally under control and that

Therefore, as everything cannot be achieved at the same

time, more than ever, each country has to define its health

priorities in oncology according to:

‰ Where it is regarding oncology indicators (incidence,

infrastructure, number of oncology specialists for

‰ What are the best cost-benefit ratios in terms of a

reduction in mortality and morbidity for different

THAT CAN BE CURED IN LOWINCOME COUNTRIES

DIRECTOR OF ALLIANCE MONDIALE CONTRE LE CANCER (AMCC), ADVISER TO THE PRESIDENT OF THE

Cancer will be one of the major health challenges worldwide in the next few decades. Among all

the different types of this ubiquitous disease, cancer in children must be among the priorities in

action plans to combat cancer in low- and middle-income countries. Among childhood tumours,

retinoblastoma appears to be a good example as it is now curable in over 95% of cases in highincome countries due to early diagnosis and quick access to a competent multidisciplinary team.

in France), we have developed a programme to help local teams in some sub-Saharan French

speaking countries (these currently include Mali, Democratic Republic of Congo, Senegal and the