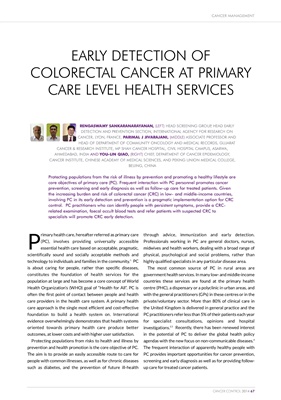 There is increasing emphasis on involving PC in the control

of chronic diseases, including cancer, as part of the new

evolved by WHO. PHCs in more and more low- to middleincome countries are currently being equipped with essential

chronic respiratory illness and facilities for the early

detection of cervical cancer by visual screening. However,

involving several stakeholders. We discuss the global role of

primary care practitioners in contributing to the early

detection and prevention of colorectal cancer (CRC) within

the context of integrating cancer control in primary care. CRC

and the risk is steadily increasing in many developing

Clinical suspicion of CRC in PC

Early detection of cancer is about finding it early when there

is a better chance of cure. The PC practitioner's awareness of

symptoms and signs of cancer, referral pathways and skills in

advantage of the opportunities provided by clients'

interaction in PC, are critical to trigger referral to secondary

or tertiary care for early diagnosis and treatment.

Identification of the symptoms and signs of cancer form the

core of the competency required for urgent referral of

patients suspected of having cancer. This could be

challenging, given the fact the symptoms are not specific to

many cancers and the evidence linking certain symptoms to

particular cancers is rather weak. Since the diagnosis of

cancer is relatively rare for PC practitioners, they need to sort

out the minority of patients who need urgent referral from

the majority who are unlikely to have the disease. They

should also take into account the harm associated with a

false-positive referral. This means that the PC practitioners

need in-service training and re-orientation for the clinical

suspicion of cancer and facilitating early diagnosis. These

Awareness about people at increased risk of CRC such as

being over 50 years old, complaining of rectal bleeding,

having recent changes in bowel habits, a personal history or

family history of colorectal polyps and CRC and a family

(IBD), such as ulcerative colitis and Crohn's disease, is

conducive to early detection. Since more than 90% of CRCs

occur in those aged over 50, ageing is considered the major

risk factor in people without IBD. For patients with a family

history of CRC in a first-degree relative, especially with a

relative diagnosed before age 55, the risk of CRC is nearly

double that of patients without a family history.

The symptoms associated with CRC are given in Table 1.

Patients presenting with rectal bleeding or change in bowel

habits are more likely to be referred by PC practitioners for

More often than not, these symptoms may be caused by

conditions other than CRC such as gastrointestinal infection,

bowel disease. As many patients presenting in PC present

with abdominal symptoms, it is important that PC

practitioners can identify those at increased risk of CRC, yet

they may not encounter more than one or two CRC patients

in a year. It is often suggested that symptoms persisting for

more than 6 weeks should trigger prompt referral for

diagnostic investigations that include specialist consultation

and endoscopy. Among the symptoms, rectal bleeding, dark

the most common and well-recognized alarm symptoms for

CRC with a high predictive value for cancer.

predictive value indicates the probability of diagnosis of the

condition when one has the symptom.

or above, registered with 128 United Kingdom general

practices between 1994 and 2000, a first occurrence of rectal

bleeding, with no previous cancer diagnosis, occurred in

of 2.2%; the predictive value increased significantly with

a higher risk of CRC diagnosis within 90 days immediately

Since more than 90% of CRCs occur

in those aged over 50, ageing is

considered the major risk factor in