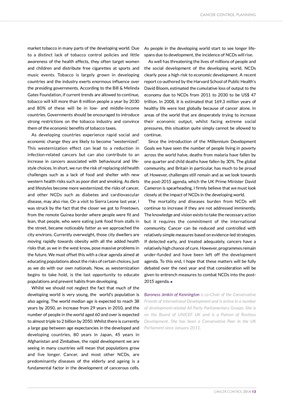 Cancer Control: How should the global target of a 25% reduction

Sir Richard Peto: I would define "premature death" as death

during the middle age range of 35 to 69 years. It's not that

and possibly even in your 80s. In a nutshell, I would like to see

a substantial reduction in the probability of a person of 35

dying before they were 70, calculating that probability at the

count those deaths from a cause which, if avoided, a person

would have had a reasonable number of years left in

Sir Richard Peto: In many populations the death rates are

actually falling, so if you are looking at global death rates,

great that it will actually finish up knocking a quarter off

these things by 2025. Overall, things are improving. In

communicable diseases. Are they right to do so?

Sir Richard Peto: I don't like these things that say "More

people die from NCDs than from communicable disease and

therefore NCDs are more important". They seem to me

misleading because they are counting deaths in old age,

when deaths are inevitable. It doesn't seem to me to be a fair

argument, because of the ages at which people are dying.

rather than just crude numbers of deaths, otherwise, it's not

a fair description of the way things are; of the importance of

things. In a way, I'd want to knock the number count down.

However, if you just count the deaths from NCDs in middle

age, then it gets them back into some kind of intuitively

reasonable perspective in comparison to deaths before

currently being discussed. What are the key global developments

Sir Richard Peto: Obviously we need to continue to do

Sir Richard Peto is Professor of Medical Statistics & Epidemiology at the

University of Oxford, United Kingdom. In 1975, he set up the Clincial Trial

Service Unit in the Medical Sciences Division of Oxford University, of which

he and Rory Collins are now co-directors. Professor Peto's work has included

studies of the causes of cancer in general, and of the effects of smoking in

particular, and the establishment of large-scale randomised trials of the

treatment of heart disease, stroke, cancer and a variety of other diseases.

He has been instrumental in introducing combined "meta-analyses" of

results from related trials that achieve uniquely reliable assessment of

treatment effects. He was elected a Fellow of the Royal Society of London

in 1989, and was knighted (for services to epidemiology and to cancer