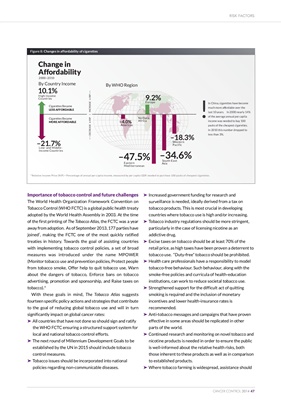 be provided to farmers in diversifying crops as well as

establishing other uses for the tobacco that is grown.

‰ Parts of the world most in need of further tobacco control

action, or "tobacco hot spots", should be given special

media attention and assistance, especially in cases where

‰ The tobacco industry should not be involved in tobacco

control at any level, as they may challenge national

legislation and try to disguise their actions as "socially

‰ Political will is necessary to help enforce tobacco control

policies and protect the public from self-serving tobacco

Tobacco use continues to be widespread and is the single

largest cause of cancer worldwide. Its use accounts for at

least 30% of all cancer deaths in developed countries with

manner. The epidemiology of smoking in high-income

nations has shown lung cancer progressing from a rare

disease to the most common cause of cancer death,

surpassing the number of cancer deaths from the next four

leading causes of cancer combined. There are currently

of which are caused by smoking.

low- and middle-income countries that have not yet seen the

dramatic increase in smoking prevalence rates and thus the

resulting illness and death caused by tobacco use and

exposure. The Tobacco Atlas is a comprehensive tobacco

designed to track and describe the global tobacco epidemic.

It includes data on prevalence, harm from smoking, personal

and societal costs of use, and industry behaviour, while

illuminating solutions to this global problem. By arming the

public with information about the crisis and suggesting

valuable tools to aid the tobacco control movement in its goal

their co-authorship of The Tobacco Atlas, Fourth Edition.

Michael Eriksen, ScD is the Dean of the School of Public Health

at Georgia State University (GSU) and lead author of The

control expert who has published extensively on tobacco

prevention and control and was the longest-serving director of

the Centers for Disease Control and Prevention's Office on

Amy Nyman, MA has over 20 years of research experience with

a strong focus on tobacco-related research.

to The Tobacco Atlas, Fourth Edition, and manages various

5. Thun M, Peto R, Boreham J and Lopez A. The tobacco epidemic today: Stages of the

6. Shopland DR. Tobacco use and its contribution to early cancer mortality with a special

7. FCTC WHO Framework Convention on Tobacco Control [homepage on the internet].

8. WHO Report on the Global Tobacco Epidemic: The MPOWER Package 2008