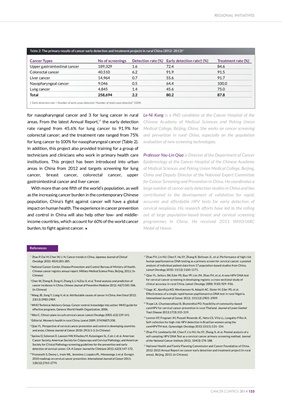 ancer is a big challenge for people in all countries

around the world. There are 12 million new cancer

diagnoses every year and about 20,000 cancer

1 Information about cancer patients is

captured and processed by cancer registries worldwide that

have been established for this purpose. Cancer registry data

is used to estimate the cancer burden in a given population, to

monitor trends and to prepare projections and other

patients groups and other users. The role of population

activities has been recognized and described in detail by

many authors.3-6 Their usefulness is demonstrated not only in

the provision of cancer statistics on population level, but also

in evaluating the effectiveness of the cancer control activities

by the calculation of indicators such as the proportion of

patients diagnosed at an early stage, the time interval until

initiation of treatment, etc. This concept of the role of cancer

registries, although acknowledged in general, is not fully

applied in some countries.4,6

In this article, the potential role of the Bulgarian National

Cancer Registry in cancer control is described and some of

the obstacles preventing its expansion are identified.

Bulgaria is situated in south-eastern Europe with a land

. The population of 7.5 million people is

predominantly urban and is concentrated mainly in the

administrative centres of its 28 districts.

operation in 1952. It is population-based, covers the whole

territory of the country and registers about 34,000 new

cancer cases a year. Cancer registration in Bulgaria is

compulsory and is regulated by orders and instructions from

the Ministry of Health. The registration network consists of

13 regional cancer registries that collect data from their

region (covering one, two or three districts) and record them

regularly to the BNCR to form the national database, which

contains over 600,000 cancer cases diagnosed between

paper only. The information for each case is structured in

more than 75 fields with details about the patient, tumour,

treatment and follow-up, which allows its use not only for

calculating incidence, prevalence and survival, but also for

different analyses and research projects in oncology, as well

as for public health purposes.

A comprehensive assessment of data quality at BNCR for

the period 1993-2010 shows that the registration of cases

registries regarding the coding of topography and

Cancer incidence in Bulgaria is lower than other countries in

south-eastern Europe, but the trends in incidence by cancer

site are similar. The curves of age-specific incidence are

identical with other south-eastern European countries and

childhood cancer incidence is within the expected range.

An analysis of the validity indicators for the data shows a

THE UNDER-USED ROLE OF THE

established for this purpose. Their role in planning and monitoring cancer control activities

acknowledged, it is not always fully applied in some countries. The Bulgarian National

control, but the use of such data by policy-makers is well below the potential opportunities

that the data provides.