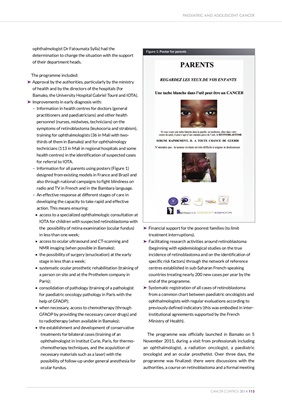 2. Magrath I, Bey P, Shad A, Sutcliffe S. Cancer funding in developing countries: the next

Desjardins L and Doz F. Results of a prospective study on the postoperative treatment

I, Sitorus RS, Tacyildiz N and Abramson DH. Strategies to Manage Retinoblastoma in

7. Epelman S. Preserving vision in retinoblastoma through early detection and

attended by the press. During this visit, after two days of

training, the first ocular prosthesis was carried out at IOTA

retinoblastoma in children were diagnosed and treated

countries). It is too early to have a clear assessment of the

evolution of the stages at diagnosis with time, but only 40%

had advanced disease at presentation (versus 60% in the

cases, 85% are now in complete remission. All enucleated

children in this new series received an ocular prosthesis.

Conservative treatment for bilateral cases will be available in

It was decided to extend the programme in other countries

and Lubumbashi in the Democratic Republic of Congo was

chosen on the same criteria:

‰ The availability of core skills through a paediatric

oncology unit supported by GFAOP, located in the

University Clinics of Lubumbashi, close to the

‰ That the doctors engaged in the care of retinoblastoma

had the support of the authorities of the hospital, the

university and the province of Katanga.

The programme was officially launched on 5 December

2012, with a conference in the faculty of medicine at

Lubumbashi with an audience of 250 people. This took place

during a visit like the first one in Bamako. The training of an

ophthalmologist and of a technician for ocular prosthesis was

undertaken in Paris early in 2013.

For these two centres, regular follow-ups were organized

The programme continues to expand and visits, on the

same basis, were conducted in October 2013 in Dakar

(Senegal) and in Abidjan (Ivory Coast). Next year, we plan to

implement a programme in Madagascar and probably later in

one or two other countries.

So, finally, we plan to cover about 200 new cases of

retinoblastoma each year (out of at least 2,000 appearing

reduce blindness and other after-effects.

This may seem like a drop in the ocean, but we think that

retinoblastoma, even if it is not a health priority according to

its scarcity, is a special tumour, the only one curable in almost

100% of cases, whereas in the absence of treatment death

occurs after a spectacular and painful evolution. We are

convinced that the success of such a programme will go far

beyond this single tumour and will benefit the entire fight

Figure 2: The first ocular prosthesis being performed in Bamako, Mali