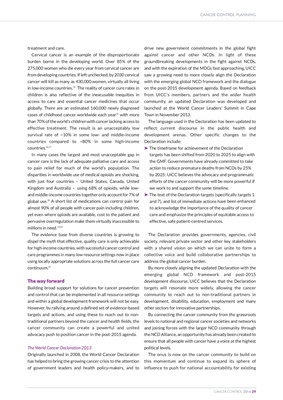 Economies through Sustainable Development, The Report of the High-Level Panel of

5. United Nations. 2013. A life of dignity for all: accelerating progress towards the Millennium

Development Goals and advancing the United Nations development agenda beyond 2015,

disease. Together with other major international NGO partners, the NCD Alliance

unites a network of over 2,000 civil society organizations in more than 170 countries.

the centre of all policies.

7. Leadership Council of the Sustainable Development Solutions Network. 2013. An

Action Agenda for Sustainable Development, Report for the UN Secretary-General.

9. United Nations. 2011. Political Declaration of the High-level Meeting of the General

Assembly on the Prevention and Control of Non-communicable Diseases

how much will it cost? Geneva: World Health Organization.

in the treatment of childhood cancer: lessons from high-income countries.

regulatory barriers to accessibility of opioids for cancer pain in Europe: a report from

cancer pain in Africa, Asia, Latin America and the Caribbean, and the Middle East:

commitments within the Political Declaration and the

GMF, and to push for cancer to be mainstreamed in the

in Economics, Computing and Statistics from the University of

Bath, United Kingdom and a Masters degree (with Distinction)

in Business Administration. He is a Harvard Business School

management of international businesses in the banking sector

to become CEO of the UICC, based in Geneva. He is also Chair

of the NCD Alliance, a coalition of around 2,000 NGOs working

on non-communicable diseases, which includes cancer,

Rebecca Morton Doherty joined UICC in 2011 as Advocacy and

Programmes Coordination Manager, and continues to

diseases arena, with an increasing focus on the post-2015

She has a BA Honours degree in Political Sciences from the

University of Warwick, and a Masters degree in Gender and

Development from the London School of Economics. Prior to

and Geneva-based NGOs in advocacy and communications