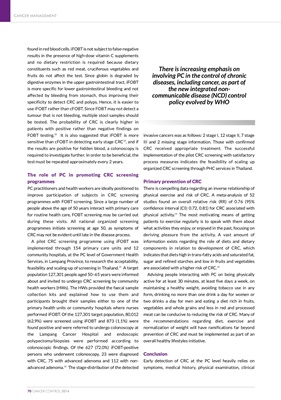 diagnosis of CRC in its early stages has immense potential to

improve survival, with 5-year exceeding 90% for stage I CRC.

Given the increasing burden of CRC in low- and middleincome countries7

tests such as iFOBT at the PC level are of paramount

importance in the early diagnosis and control of CRC in such

countries in view of the resource constraints in organizing

population-based screening programmes. However, the

challenge is that PC services in many low- and middle-income

countries are already over-crowded and over-extended with

a multitude of tasks added each year without matching

augmentation of resources provided to cope up with

services for CRC at the PC level should be extended by

training for the care providers, as has been shown in the

Dr R Sankaranarayanan is trained in radiotherapy and clinical

oncology and is currently special adviser on cancer control, the

Head of the Early Detection & Prevention Section and the

Screening Group at the World Health OrganizationInternational Agency for Research

Lyon, France. Dr Sankaranarayanan has a keen interest and

and response. He coordinates a global programme of research

and cross-sectional studies and training initiatives in affordable

Dr Parimal Jivarajani is the Head of Preventive Oncology at the

and breast cancer through primary care services in Gujarat. He

is actively involved in training and re-orienting primary care

workers in the early detection and prevention of cancer. He also

coordinates cancer control activities in the state of Gujarat and

he is involved in monitoring cancer incidence and outcomes

through operation-based cancer registration in urban and rural

Professor You-Lin Qiao, MD is Director of the Department of

Cancer Epidemiology at the Cancer Institute/Hospital of the

College, Beijing, China and the Deputy Director the National

Expert Committee for Cancer Screening and Prevention in China.

He coordinates a large number of breast and cervical cancer

early detection studies in China and has contributed to the

development of the validation of rapid, accurate and affordable

HPV tests for the early detection of cervical neoplasia. His

and cervical screening programmes in China.

2. O'Donnell CA. Variation in GP referral rates: what can we learn from the literature?

screening in Lampang Province, Thailand: Preliminary results from a pilot