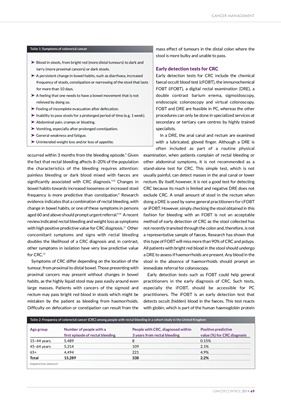 found in red blood cells. iFOBT is not subject to false-negative

results in the presence of high-dose vitamin C supplements

and no dietary restriction is required because dietary

constituents such as red meat, cruciferous vegetables and

fruits do not affect the test. Since globin is degraded by

is more specific for lower gastrointestinal bleeding and not

affected by bleeding from stomach, thus improving their

specificity to detect CRC and polyps. Hence, it is easier to

use iFOBT rather than cFOBT. Since FOBT may not detect a

tumour that is not bleeding, multiple stool samples should

be tested. The probability of CRC is clearly higher in

patients with positive rather than negative findings on

10 It is also suggested that iFOBT is more

the results are positive for hidden blood, a colonoscopy is

required to investigate further. In order to be beneficial, the

test must be repeated approximately every 2 years.

The role of PC in promoting CRC screening

PC practitioners and health workers are ideally positioned to

programmes with FOBT screening. Since a large number of

people above the age of 50 years interact with primary care

for routine health care, FOBT screening may be carried out

during these visits. All national organized screening

programmes initiate screening at age 50, as symptoms of

CRC may not be evident until late in the disease process.

implemented through 154 primary care units and 12

community hospitals, at the PC level of Government Health

Services, in Lampang Province, to research the acceptability,

feasibility and scaling-up of screening in Thailand.13 A target

about and invited to undergo CRC screening by community

collection kits and explained how to use them and

participants brought their samples either to one of the

found positive and were referred to undergo colonoscopy at

the Lampang Cancer Hospital and endoscopic

polypectomy/biopsies were performed according to

persons who underwent colonoscopy, 23 were diagnosed

The stage-distribution of the detected

invasive cancers was as follows: 2 stage I, 12 stage II, 7 stage

III and 2 missing stage information. Those with confirmed

implementation of the pilot CRC screening with satisfactory

process measures indicates the feasibility of scaling up

There is compelling data regarding an inverse relationship of

physical exercise and risk of CRC. A meta-analysis of 52

physical activity.14 The most motivating means of getting

patients to exercise regularly is to speak with them about

what activities they enjoy, or enjoyed in the past, focusing on

deriving pleasure from the activity. A vast amount of

information exists regarding the role of diets and dietary

components in relation to development of CRC, which

indicates that diets high in trans-fatty acids and saturated fat,

sugar and refined starches and low in fruits and vegetables

are associated with a higher risk of CRC.15

Advising people interacting with PC on being physically

active for at least 30 minutes, at least five days a week, on

maintaining a healthy weight, avoiding tobacco use in any

form, drinking no more than one drink a day for women or

two drinks a day for men and eating a diet rich in fruits,

vegetables and whole grains and less in red and processed

meat can be conducive to reducing the risk of CRC. Many of

the recommendations regarding diet, exercise and

normalization of weight will have ramifications far beyond

prevention of CRC and must be implemented as part of an

Early detection of CRC at the PC level heavily relies on

There is increasing emphasis on

involving PC in the control of chronic

diseases, including cancer, as part of