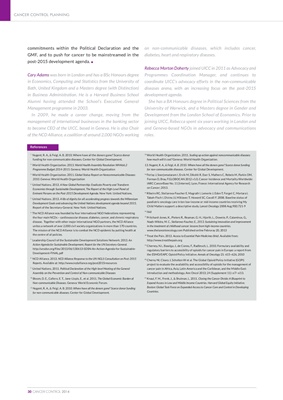 on-communicable diseases (NCDs) are the world's

number one killer, bringing hardship to rich and

poor nations alike. As the largest contributors to

mortality both globally and in the majority of low- and

million of all deaths worldwide, exacting a high toll on

issue as well as a major cause of poverty. They will be the

leading global cause of disability by 2030.2

The adoption by the UN General Assembly of the UN

Political Declaration on NCD prevention and control in 2011

was a landmark moment, putting cancer and NCDs on the

22 action-oriented commitments covering the spectrum of

governments to ensuring that NCDs are at the centre of

driving a whole-of-society and whole-of-government

response to the problem. In essence, it lays the foundation for

a new era of political leadership, multisectoral action, and

international cooperation on NCDs.3 The specificities of

cancer control (e. g. vaccination and screening) are an integral

part of the declaration and particularly mentioned in the

The UN Political Declaration 2011 also has set in motion a

driven process to develop a new global architecture for NCDs

‰ The Global NCD Action Plan (GAP) as agreed by the

over the next seven years and recommend clear actions

‰ The Global Monitoring Framework and its targets and

indicators as part of the GAP to monitor progress

‰ The establishment of the NCD United Nations

‰ A Global Coordination Mechanism will mobilize

multisectoral action and resources of a broad range of

control, and two of the nine voluntary targets for 2025 (as a

follow-up of the UN Political Declaration5) are closely

related: the global target (25 by 25) for reduction in cancer

mortality, and the target on coverage by essential NCD

medicines and technologies. In this context, the European

Society for Medical Oncology (ESMO) aims to play a pivotal

2020 for the Prevention and Control of Non-communicable Diseases. Specific objectives will

be pursued in collaboration with leading oncology societies, through a pooling of technical