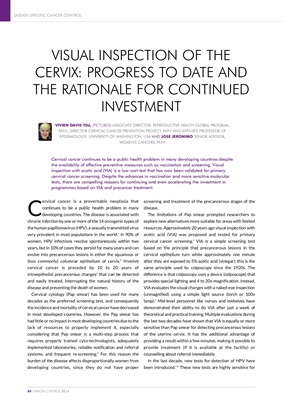 detection of precancer and cancer, and they have the

advantage that the screening can be done using a vaginal

sample self-collected by women without the need of a

speculum exam.10,11 Now we have the potential for reaching

women at their communities or homes and inviting them to

Even in this new scenario, though, women with a positive

HPV test result will require a pelvic examination and direct

visual evaluation of the uterine cervix to determine if

and what treatment is appropriate. Therefore, VIA will still be

required for screening programmes even when HPV testing

comes into wider use.

Another area of progress in the fight against cervical

cancer has been the introduction of vaccines against HPV.

The vaccines have proven to be highly effective for

preventing infection with the serotypes included in them, but

the current vaccines include only two oncogenic HPV types

responsible for approximately 70% of the cases of cervical

cancer worldwide. VIA will still be required for the screening

of vaccinated women to detect the 30% of the remaining

disease that is not covered by the current vaccines. In

addition, the global introduction of these vaccines over the

next decade will not benefit the huge cohort of women who

were beyond vaccination age or already infected with HPV

and are in need of cervical cancer screening.

With the articulation of new targets for non-communicable

identified as a key indicator of progress towards cancer

control.12 For most low- and middle-income countries, VIA is

the only way currently to achieve high levels of coverage with

screening and treatment services. Developments in all these

There has been significant progress in the introduction and

acceptance of VIA for cervical cancer screening. In the early

days health care providers were sceptical about the value of

the test since it looked "too simple" compared to Pap smear.

The large body of evidence generated as part of the Alliance

for Cervical Cancer Prevention (ACCP) showed that in most

settings VIA was more sensitive for detecting precancer than

Pap smear.14 Even though it is difficult to implement rigorous

Sankaranarayanan et al15 performed a study in India where a

single round of VIA screening, accompanied by treatment

when needed, reduced cervical cancer mortality by 35% in

later another study in a different part of India with less

positive results for VIA, but the reduction of mortality

attributable to VIA was better than that obtained with Pap

Another important landmark in the in the introduction of

Organization (WHO).17 Those guidelines recommend VIA as a

screening test over Pap smear unless cytology is already

established and working well. In areas where there is no

screening at all and where HPV testing is not yet feasible, it is

recommended to start a programme using VIA instead of

trying to implement Pap smear. Using VIA as the screening

test, it is still possible to develop the rest of the programme

structure - such as community mobilization, precancer

treatment, referral for complex care and record systems for

patient and programme monitoring - that can be the

Fortunately, we now have better and more standardized

training materials that can be implemented in countries

Recently PATH partnered with Jhpiego and the Peruvian

centre (TEC) in Peru and to validate training materials for

and guides for training community promoters to educate

women about the need for screening, materials for training

health providers in VIA and cryotherapy, and materials for

maintaining quality among providers who are performing

VIA. These materials are currently used widely in multiple

countries in Latin America, and are being complemented by a

web-based tool for providing the reinforcement of skills to

providers in the field. As a result of this effort, we now have

thousands of providers with skills for VIA and cryotherapy in

There has been significant progress

in the introduction and acceptance

of VIA for cervical cancer screening.

In the early days health care

providers were sceptical about the

value of the test since it looked "too