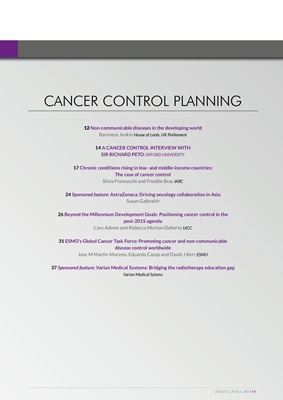 million people) and about 70% of these deaths

occurred in low- and middle-income countries. This

is projected to continue rising to an estimated 13.1 million

deaths in 2030. The developing world is clearly suffering

disproportionately due to a lack of education, treatment and

In a developed and progressive society we understand the

risks we face when smoking a cigarette, eating a hamburger

or drinking more than the recommended glass of wine a day.

We are inundated with advice about the best foods to eat

and avoid, how to cut down on unhealthy habits, the best and

most effective way to exercise and the risks of not following

Poor lifestyle choices are one of the key contributors to

cancer. About 30% of cancer deaths are due to obesity, poor

diet, lack of physical activity, tobacco use and alcohol use. In

many parts of the world, the challenge of sourcing food is

more important than considering its nutritional value. If food

is affordable and safe then millions of people would not

question their luck by considering its health risks. However,

the lack of education regarding lifestyle choices across the

developing world is leading to a pandemic of NCDs which

described as "a public health emergency in slow motion".

Tobacco use is the biggest risk factor for cancer, causing

22% of global cancer deaths in low- and middle-income

countries. Despite the fact that the link between lung cancer

and tobacco was established more than 50 years ago, there

are still an estimated 1 billion smokers in the world equating

to about a quarter of all adults. It is hard to believe that there

are still areas of the world where tobacco is considered to

pose the same risk as breathing fresh air and yet the

consumption of cigarettes in many developing countries is

increasing rapidly amongst both men and women and many

remain unaware of the risks that smoking carries. However,

as recent news stories have highlighted, smoking is not just

an issue which affects adults or even teenagers.

shocked the world in 2010. The Indonesian baby had

developed a 40-a-day habit. Now Ardi, with the assistance of

a rehabilitation programme set up by the Indonesian

Government, has kicked the habit however he has only

swapped one vice for another. Instead of smoking, five-year

dangerously overweight, weighing 53 pounds. This is not a

showed that 25% of Indonesian children aged 3 to 15 have

tried cigarettes, with 3.2% of those active smokers. Without

childhood tragedies such as these will not only continue but

kill more than 6.3 million people a year - more than AIDS,

tuberculosis and malaria combined. Despite this huge cost to

human life, the tobacco industry is permitted to aggressively

IN THE DEVELOPING WORLD

BARONESS JENKIN, CO-CHAIR OF THE CONSERVATIVE FRIENDS OF INTERNATIONAL

DEVELOPMENT AND MEMBER OF THE HOUSE OF LORDS, UK

disease and diabetes pose the biggest threat to human life across the world. Over 36

million people die every year from NCDs and 14 million of these die too young, between

the ages of 30 and 70. Eighty-six per cent of these premature deaths are in developing

countries and result in US$ 7 trillion worth of economic loss. Furthermore, their impact

means that millions of people are excluded from the labour market and ergo, from

making a contribution to their national economies. In this way, NCDs are a direct

opponent of economic growth in developing countries. Despite their obvious impact on

development, NCDs were not directly combatted as part of the Millennium Development

Goals. The post-2015 agenda must see a concerted and collaborative effort to combat

NCDs, specifically in relation to cancer.