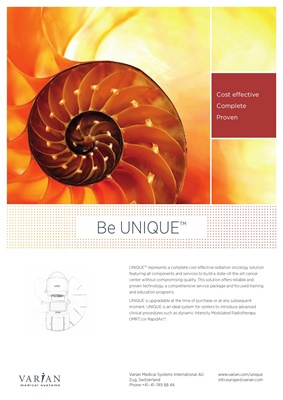 y 2050, the global cancer burden is expected to grow

cancer deaths per year, according to the American

Cancer Society. There is a stark inequality in access to

radiotherapy treatments depending where in the world you

live. Whereas the United States has roughly 12 medical

linear accelerators per million population and most

developed European countries have between 5 and 8

and Latin America have far fewer than one machine per

to 10,000 more treatment machines to even start bridging

this gap, in effect nearly doubling the number of machines

But even if this level of investment were feasible, there are

nowhere near enough qualified staff to operate the new

machines. This is why Varian Medical Systems, the world

leader in radiotherapy equipment and software, have

developed the Access to Care programme to help facilitate

the training of doctors, technicians and medical physicists to

"We started to develop this concept three years ago

the first year speaking to people across the developing world

Worldwide Training and Education. "The programme has

been designed to bridge the education gaps that may exist in

a particular region and by doing so enabling the safe, effective

Access to Care is based around three core elements: a

to global clinical expertise via Varian's Network of Experts;

and clinical exposure for students at a one of Varian's

specialists and an 80-strong clinical helpdesk to help guide

students through the learning process.

An early Access to Care project is taking place in Iraq, where

direct on-site training is challenging due to travel restrictions.

To compensate for this, Varian has developed educational

modules specifically for customers in Iraq. The need for such

a programme became greater when Varian donated a

treatment machine to the Basra Children's Hospital as part of

When this hospital opened its doors on 26 October 2010, it

represented the culmination of a seven year dream by Project

Laura Bush and the Iraqi government to provide the nation's

accelerator donated to the project by Varian.

Childhood cancers are eight to ten times more common in

Iraq than in developed countries, with a particularly high

prevalence of brain tumours, lymphoma and leukaemia. To

Clinac® iX linear accelerator for treatments and a simulator

for planning and verifying treatments.

"We envisioned a new hospital with modern equipment and

represent over a half of the total population - and the country's

a million children in southern Iraq and Basra, the country's

second largest city. The donation from Varian represents a

chance to be healthy future leaders of their country."

As part of the Access to Care programme, staff at the Basra

Children's Hospital and other Varian customers in Iraq will