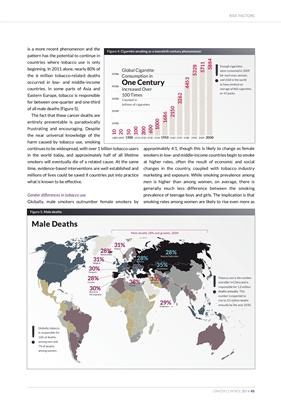 teenage female smokers continue their addiction as adults. In

fact, securing youth smokers in this way is a survival strategy

of the tobacco industry, as most adult smokers begin their

addiction before the age of 18. Of significant concern are lowand middle-income countries in which the smoking rates

teenage boys are alarmingly high; in some countries, virtually

more than 3.8 million hectares of agricultural land. Tobacco is

grown with little benefit to farmers, who are often trapped in

a cycle of poverty and are victims of farming-related illness

from exposure to tobacco leaves and nicotine. Additionally,

products, and in 2009, six of the world's top 10 tobaccoproducing countries had undernourishment rates

5% and 27%. Tobacco companies and manufacturers are the

winners of tobacco production. In 2010, the six leading

tobacco companies in the world had combined revenues of

more than US$ 346 billion and combined profits over US$ 35

billion. These companies profit greatly from the addiction of

others and work diligently to keep customers as lifetime

Tobacco marketing is one avenue of attracting and

their products heavily. In 2008 in the United States, tobacco

companies spent more than US$ 9.9 billion on cigarette

marketing and an additional US$ 548 million on smokeless

tobacco marketing, equating to US$ 34 being spent on

tobacco marketing for every man, woman and child in the

United States. Marketing restrictions have increased in highincome countries, but many

countries do not have

restrictions and adults and

children are exposed daily to

The results of the tobacco

epidemic are costly and

include both direct and

indirect costs to society. Direct medical costs are incurred to

treat tobacco-related illness and indirect costs include the

loss of labour productivity, pollution and other environmental

harm, and fire damage, not to mention the costs of human

suffering that victims and their families face. In some

countries, such as Egypt and Mexico, tobacco-related health

opportunity costs that can involve the sacrifice of basic needs

like food and education to satisfy their addictions. Cigarette

prices vary widely from country to country with a tendency

toward more affordability in low- and middle-income

countries (Figure 8), with "affordability" expressed as a

percentage of income or duration of work time it takes to

purchase a product. The fact that cigarettes may be more

affordable compounds the problem, as low costs make it

easier for smokers to justify the purchase of cigarettes over

Countries With the Highest

Figure 6: Countries with the highest smoking rates among boys

"If you're not allowed it, but you

really want it, then you can have it!"