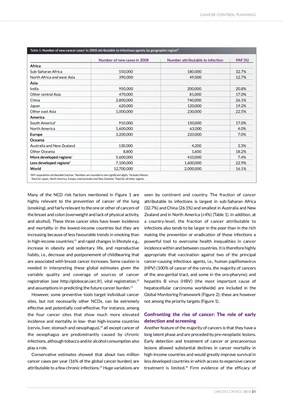 screening programmes in the reduction of cancer mortality

exists for three cancer sites: the cervix uteri, breast and

Cervical cancer screening stands out compared to other

cancer screenings as it allows the recognition and treatment

techniques and HPV-testing) that can be chosen according to

compared to cytology in terms of sensitivity, duration of

across different diagnostic laboratories has been

demonstrated by a number of randomized clinical trials and

prospective data in high- and low-income countries.30 The

superiority of HPV-testing has been recently recognized in

the new WHO Guidelines for cervical cancer screening31 and

a simple and cheap HPV test, careHPVTM (Qiagen), has proved

to be very accurate. Unfortunately, HPV vaccination and

HPV-testing had been evaluated in the Global Action Plan

against NCDs before the cost of the HPV vaccines and HPV

test started to decrease. They have both been recently

package32 to which WHO participated.

There remains an important gap between the feasibility of

the secondary prevention of cardiovascular diseases and

more harmful than those in cardiovascular diseases

such as hypertension and hypercholesterolemia).

accurate diagnoses and multi-therapeutic approaches can be

made available. The Global Action Plan against NCDs

endorsed, however, only essential medicines and

technologies that can be used in primary care settings. The

only clinical intervention for cancer explicitly included was,

simple intervention that is, however, rarely available in lowincome countries because of fears of inappropriate drug

In an expanded cancer care package not restricted to bestbuys in low-income countries, WHO also included

cancer of the colon and oral cavity, and treatment of

to be tailored to the needs and resources of different

countries. In high-income countries, for instance, the

randomized evidence indicates that around one breast

cancer death would be prevented in the long term for every

mammography over a 10-year period.34 In low- and middleincome countries breast cancer rates

are still lower than in

high-income countries and resources might be better used to

breast lumps to seek and receive treatment in a timely

Treatment of cancer patients is, however, a strong

aspiration in every country. In middle-income countries it is

increasingly common that families are impoverished and

health expenses overcharged by the purchase of sometimes

treatments. It would be, therefore, essential that WHO and

other UN agencies (including IARC and the International

control" and re-assess which essential medicines and

technologies should be recommended for cancer in the lowand middle-income countries (see Mendis et al,33

exercise on the management of cardiovascular diseases and

In conclusion, the mobilization against cancer still requires

much more global and regional coordination of resourcelinked

must often determine their own course of action with varying

Dr Silvia Franceschi was trained as an MD and gynaecologist

and obtained a Masters degree in Epidemiology at Oxford under

the supervision of Sir Richard Doll. After having led the

Epidemiology Unit of the Aviano Cancer Center, she became

Head of the Infections and Cancer Epidemiology Group at the

France in 2000. She led international studies on the relationship

between infectious agents and cancer, most notably human

papillomavirus and HIV. She is the author of over 1,000

publications in peer-reviewed journals. She is Special Advisor to

the IARC Director for the collaboration with the World Health

Organization and other United Nations agencies.

Dr Freddie Bray is Deputy Head of the Cancer Information

and at the Cancer Registry of Norway and University of Oslo