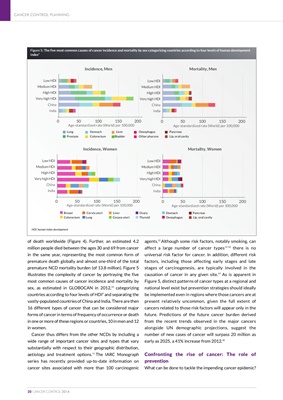 Many of the NCD risk factors mentioned in Figure 1 are

highly relevant to the prevention of cancer of the lung

(smoking), and fairly relevant to the one or other of cancers of

the breast and colon (overweight and lack of physical activity,

and alcohol). These three cancer sites have lower incidence

and mortality in the lowest-income countries but they are

increasing because of less favourable trends in smoking than

in high-income countries;21 and rapid changes in lifestyle e.g.,

increase in obesity and sedentary life, and reproductive

habits, i.e., decrease and postponement of childbearing that

are associated with breast cancer increases. Some caution is

needed in interpreting these global estimates given the

variable quality and coverage of sources of cancer

and assumptions in predicting the future cancer burden.23

sites, but not necessarily other NCDs, can be extremely

effective and potentially cost-effective. For instance, among

the four cancer sites that show much more elevated

incidence and mortality in low- than high-income countries

(cervix, liver, stomach and oesophagus),24 all except cancer of

the oesophagus are predominantly caused by chronic

cancer cases per year (16% of the global cancer burden) are

attributable to a few chronic infections.25 Huge variations are

seen by continent and country. The fraction of cancer

attributable to infections is largest in sub-Saharan Africa

a country-level, the fraction of cancer attributable to

making the prevention or eradication of these infections a

incidence within and between countries. It is therefore highly

appropriate that vaccination against two of the principal

(HPV) (100% of cancer of the cervix, the majority of cancers

of the ano-genital tract, and some in the oro-pharynx); and

hepatitis B virus (HBV) (the most important cause of

hepatocellular carcinoma worldwide) are included in the

Global Monitoring Framework (Figure 2); these are however

not among the priority targets (Figure 1).

Confronting the rise of cancer: The role of early

long latent phase and are preceded by pre-neoplastic lesions.

Early detection and treatment of cancer or precancerous

high-income countries and would greatly improve survival in

less developed countries in which access to expensive cancer

26 Firm evidence of the efficacy of

Number of new cases in 2008 Number attributable to infection PAF (%)

Numbers are rounded to two significant digits. b

Total for all other regions.