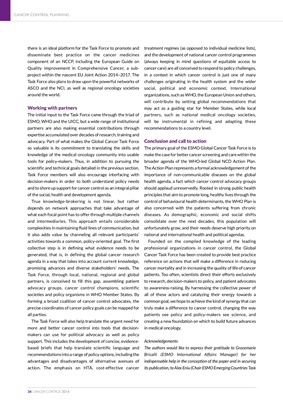 and Liaison IARC) for their comments and advice, and to

Valencia) for her support in bringing this paper to successful and

public health education and training from the University of

speciality is preventive medicine and public health, with

particular emphasis on health policy and cancer control. In

addition to his professorship at the University of Valencia, he is

the Coordinator of the Quality Unit at the Valencian Clinical

Hospital and advises the WHO Regional Office for Europe, where

he previously served as Director of Programme Management. A

founding member of the European Academy of Cancer Sciences,

Committee, and has also advised the European Institute of

Oncology and the International Agency for Research on Cancer

(IARC), as well as having published more than 300 scientific

papers both nationally and internationally.

Eduardo Cazap, MD, PhD, FASCO is the founder and first

President of the Latin American and Caribbean Society of Medical

Oncology (SLACOM), Immediate Past President of the Union for

International Cancer Control (UICC-Geneva) and member of the

Executive Committee of the National Cancer Institute of

Argentina. He has published over 180 papers and his main areas

of interest are global health, cancer control and prevention, breast

and cervical cancer and independent clinical research. He is

Chairman of the Executive Committee of the Breast Health Global

Initiative (BHGI), Seattle, USA and President of the UICC World

Cancer Congress in Montreal, Canada, in 2012. Dr Cazap was

American Society of Clinical Oncology (ASCO) and Chairman of

the Scientific Council of the International School of Senology (SIS),

Strasbourg, France. Dr Cazap is currently Deputy Chair of the

David J Kerr, CBE, FRCP, FMedSci has made sustained and

research and has published over 400 papers in high profile

journals, authored over 20 books including the Oxford Textbook

of Oncology, and has been awarded four prestigious,

international research prizes. He has been elected Fellow of

Academy of Medical Sciences, President of ESMO and Founding

Fellow of the European Academy of Cancer Sciences. He

control plans in Africa. In addition to his professorship at Oxford

and David Cameron) as health adviser, and has served on Qatar's

3. General Assembly of the United Nations. 2011 High Level Meeting on the Prevention

4. World Health Organization. Global Action Plan for the Prevention and Control of NCDs

5. World Health Assembly. Follow-up to the Political Declaration of the High-level Meeting of

the General Assembly on the Prevention and Control of Non-communicable Diseases -Doc.

8. Porter ME. What is Value in Health Care? White Paper. Boston: Harvard Business

School, Institute for Strategy and Competitiveness; 2008.

cancer pain in Africa, Asia, Latin America and the Caribbean, and the Middle East:

12. Albreht T, Jelenc M, Gorgojo L. From 'on paper' to 'into action': development of cancer

the European Partnership for Action Against Cancer. Ljubljana: National Institute of

Public Health of the Republic of Slovenia; 2013. Also available from: