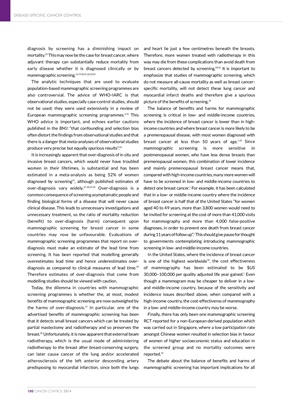 countries using or considering the introduction of

mammographic screening for breast cancer. Most

importantly, it emphasizes the importance of concentrating

on programmes which educate women and health care

professionals so that breast cancer is diagnosed early and

women are competently treated.1 It is wise to heed what

Macpherson wrote in the BMJ in 2010 about the United

mammographic screening programme (NHSBSP): "Since all

benefits (reduced mortality) ought to be unambiguous and

considerable and the risks of harm small".36

Most importantly for low- and middle-income countries, as

well as high-income countries, is the consideration of the

costs of mammographic screening, including both the costs of

the invitation to screen programme and the costs of the

and follow up diagnostic testing and treatment for breast

cancer are of a high standard in the country, then the

So is there an alternative to mammographic screening? In

high-income countries most breast cancer is not usually

diagnosed by screening mammography. For example, in

Australia only about a third of breast cancer is diagnosed by

has been diagnosed early by women who have been educated

to be aware of the appearance and "feel" of their breasts:

there is no financial barrier to women attending health care

examination (CBE) by their doctor on a regular basis. Since

1986, prior to the introduction of the "invitation to

years23, more than 80% of Australian women diagnosed with

breast and the adjacent axilla17,39 and so meets the EBCTCG

cancer in Australian women has been diagnosed early.40

Population-based treatment surveys have shown that

since 1995 the majority of Australian women diagnosed with

early breast cancer have been treated as advised by the

EBCTCG and breast cancer-specific mortality has been falling

in all age groups since then, well before the national

mammographic screening programme could have had an

impact on mortality.23 Many European countries have

mortality, which have also largely been attributed to

mammographic screening any country with a significant

burden of breast cancer should first ensure that women with

breast symptoms are educated to present to health care

professionals early and that breast cancer is diagnosed

promptly and competently and treated as described above.

There have been two RCTs testing BSE in Russia and China,

and BSE did not reduce breast cancer mortality in the

intervention groups, who were taught and practiced BSE, as

compared to the control groups who were only observed.44,45

Furthermore, results from several studies that suggested that

that "For the teaching of BSE, there is moderate certainty

that the harms outweigh the benefits".46 However, it must be

noted that in both the China and Russian trials, there was

limited room for BSE screening to achieve a mortality

reduction since breast cancer awareness in the populations

was already high and the clinical stage at diagnosis was

relatively good.1 In the trial in Shanghai, China, 45% of the

control women were Stage I and only 1.5% of the BSE

intervention and 2.5% of the control women were Stage IV.

These trial results demonstrated that the specific process of

BSE does not carry benefit in those settings. The question

remains open for countries where a higher proportion of

cancers are diagnosed at late/advanced stages.

Evidence about the efficacy of population-based screening

for breast cancer with CBE is controversial. A Canadian RCT

of breast cancer screening evaluated the combination of

mammography and CBE versus CBE alone.47 This RCT

showed that there was no benefit in adding mammography to

CBE. Since the reduction in mortality in this Canadian trial

some mammography-only RCT47, a reasonable conclusion

would be that CBE was equivalent to mammography as a

screening test in this Canadian setting. A RCT of CBE versus

observation is currently being conducted in Mumbai (India)

entered its tenth year and more than 3 rounds of screening

have taken place. Early results show that the stage

distribution is significantly better in the screened group than

in the control groups. The principal objective of the trial, i.e.

demonstration of a reduction in mortality, will become

evident only after a further 5 to 8 years.48

covering a population of 1.1 million women, based on the