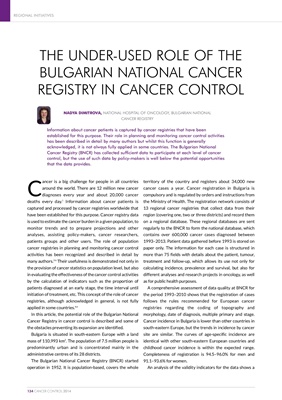 favourable trend for increasing the proportion of

registered based only on information from death certificates

as well as those with unspecified stages, and a relatively

These indicators are within the range defined for valid data in

yields comparable data that are close-to-complete and

reasonably accurate, especially in recent years, which is a

prerequisite for valid conclusions drawn from them.9

The most common cancer in males is lung cancer (18.9% of all

cancer cases) and breast cancer in females (27.3% of all

cancer cases). These two are also the most frequent causes of

cancer death in males and females, respectively. Among the

five most common cancers in males, besides lung cancer, are

the five most common in females, besides breast cancer, are

About 40% of patients are diagnosed at advanced (III and IV)

stages of the disease. Incidence (all sites) is increasing by 1.5%

annually and mortality does not show any statistically

significant trend. Cancer incidence (all sites, both genders) is

lower, while cancer mortality is higher than the average

which is lower than the average for European patients

According to WHO, cancer control has the following

palliative care.2 The main goal of cancer control is to reduce

incidence, morbidity and mortality and to improve quality of

life of cancer patients with optimal use of available resources.

Even if Bulgaria does not have a national cancer control

there are several projects for specific cancer prevention and

for prophylactic examinations of breast, prostate and the

colon-rectum. A smoking ban for closed places was

A pilot project for screening of breast, cervix uteri and

The role of BNCR in the planning of cancer control

activities can be the assessment of the scale of cancer

problems in the population in terms of the number of new

and age-groups, frequency distribution by stage at diagnosis,

trend analysis and projections. Such description of cancer

patterns allows the identification of the most frequent

cancers, the most affected age groups or geographic areas,

which is important for allocating resources.

The potential uses of BNCR data

The impact of prevention activities can be monitored using

data from BNCR in the following ways:

‰ analyzing the trends in incidence of cancers associated

‰ comparison of trends in other populations and over other

The role of BNCR in monitoring the effect of activities

directed at early detection of cancer can be used for:

‰ surveillance of stage distribution of cancers, subject to

‰ analysis of trends in incidence and mortality of cancers

that can be screened for - cervical, breast, colorectal.

When monitoring the patterns and effects of treatment in

cancer patients, the data from BNCR can be used for:

‰ surveillance of trends in mortality from curable malignant

‰ analysis of survival by site, age-group, hospital for

Cancer incidence in Bulgaria is lower

than other countries in south-eastern

Europe, but the trends in incidence by

The most common cancer in males

cases) and breast cancer in females