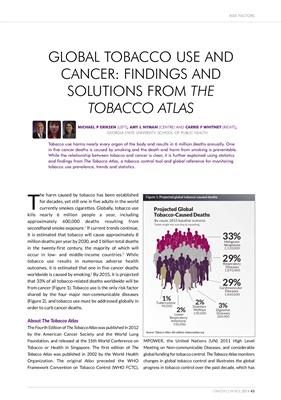 arguably been the most productive period in

statistics on the history of tobacco use,

statistics on deaths and harm from smoking,

personal and societal costs of tobacco use, and

current and proposed solutions for global

tobacco control. The Tobacco Atlas, and the

www.tobaccoatlas.org, is a comprehensive and

user-friendly tool for investigating and

highlight key findings from The Atlas, their implications for

Tobacco and cancer findings from The Tobacco Atlas

Harm and cancer resulting from tobacco use

Tobacco use harms nearly every part of the body, inducing

cancers in many different organs. While much research has

focused on the impact of cigarette smoking on health

outcomes, links have also been established between

smokeless tobacco and oral cancers, and between other

adverse outcomes and the use of cigars, pipes, water pipes,

kreteks and bidis. Cigarette smoking, or the inhalation of

burned tobacco leaves, is the single largest contributor to

cancer deaths in the world. Worldwide, roughly 80% of male

caused by smoking. The International Agency for Research

on Cancer (IARC) has estimated that annually there are 1.1

million lung cancer deaths globally and of these, 83%

cigarette smoke extend to non-smokers who are exposed to

countries with a high male to female smoker ratio, women are

occur among women and children (Figure 3).

(Figure 4) that has followed a pattern of smoking initiation

and the broad adoption of the habit, trailed by an increase in

smoking-related illness and death and eventually a decline in

smoking prevalence.5 This pattern has been observed in many

This same pattern is now emerging in low- and middleincome countries. Comparing areas in which cigarette

consumption is roughly equivalent, there is a disturbing trend

towards an increase in cigarette prevalence and consumption

in low- and middle-income countries, even as

consumption decreases in high-income countries. For

increasing in the Middle East and Africa by 57%. The

pattern is such that, as the population in low-income

countries increases, the net result will be a global

increase in cigarette consumption. In high-income

countries, where cigarette smoking has been

widespread for the better part of a century, at least 30%

of all cancer deaths are caused by tobacco use,

system cancer.6 This mortality pattern, which has

occurred over decades, is now decreasing as a result of

fewer smokers in the developed world. The same

mortality pattern is beginning to emerge in low- and

middle-income countries, where extensive tobacco use

Tobacco is the only risk factor shared by all of

Caused by Secondhand Smoke in Nonsmokers 2004

occur among women and children