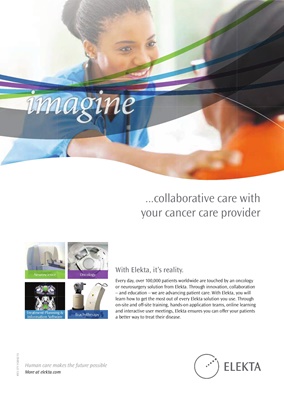 The current focus on global health and specifically on

tremendous opportunity to reduce the burden of

cancer in the world. Global efforts in cancer registration

provide a huge amount of information on the cancer burden

and allow us to track cancer incidence and mortality across

Cancer is a complex group of diseases and although we

now know a lot about what causes cancer, how to prevent it,

how treat it effectively, and how to support and palliate

patients with cancer, in many parts of the world this

knowledge has not been optimally applied. It is currently

significant proportion of cancers can be cured or treated

effectively. The most important factor for cancer prevention

in low- and middle-income countries, are infection related

and effective vaccines against HBV and HPV infections are

expected to be effective tools for prevention of cervical and

liver cancers. Cancer prevention is very important but many

cancers are not preventable. In addition, it is well known that

high quality diagnostic and treatment services have been

shown to cure and prolong life in many cases.

Early detection and effective cancer treatment can save

lives. The access to affordable care represents a challenge in

many countries. In some states, access is limited by the

paucity of health care resources, in others by

to care include lack of insurance, lack of trained health

professionals, lack of technologies for diagnosis and

access to treatment is most limited in low- and middle

care. Cancer is still considered as a relatively rare and mostly

associated with cancer presents a huge barrier on all fronts

from the individual to the decision-makers. Other health

attention. For many years now the World Health

Organization recommended that each country develops a

and resources. Many countries have done so, but many plans

have not begun to be implemented.

The lack of equity in access to cancer care results in

less than 5% of the world's resources

for cancer. Great disparities exist not only among countries

but also within countries. One of the unaddressed issues in

cancer control is the limited access to cancer care with

Cancer presents an increasing health problem in the world. Previously seen as a problem

of the developed world, it is now recognized as a global issue. Currently, two thirds of all

Cancer Report from the International Agency for Research on Cancer (IARC) confirms 14.1

million new cancer cases and 8.2 million deaths in 2012. This number represents less than

that if no action is taken it will increase by 50% by 2030. Most of the increase in incidence

will be due to the lack of access to care.1 The United States cancer statistics have shown

decreasing death rates from cancer in the last two decades. However, most low- and

With modern cancer care many deaths can be prevented.