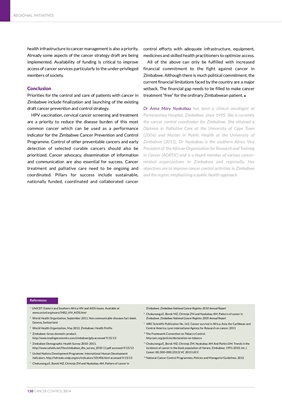 tremendous changes have been seen in the

Chinese population because of environmental

status and lifestyle factors. As a consequence, the cancer

burden in China has increased over the past three decades.1

In the latest report from the National Cancer Registry

Centre, the estimate of total nationwide cancer cases and

cancer deaths in China was approximately 3.5 million and 2.5

million per year respectively in 2009, with the incidence (agestandardized rate

with the world standard population

incidence rate was higher in urban areas than in rural areas,

the upward trend in rural areas was more obvious than in

deaths in the Chinese population, the most important are

ranks are different when stratified by gender. The top six

occupational agents; whilst those in women are chronic

future, then secondary prevention, which is known as early

detection and early treatment, is the most effective measure

for cancer control and prevention in China.

Following the guidelines of "Programme of Cancer

Due to the increasing burden of cancer in China, the Chinese government launched a series of

successful ones which cover a large number of rural women all over China. Screening has

increased the detection of early cancer cases which could be treated more effectively. New

programmes to the whole population at risk.

Table 1: Demonstration project on the early detection and treatment of cancer in rural China, 2008