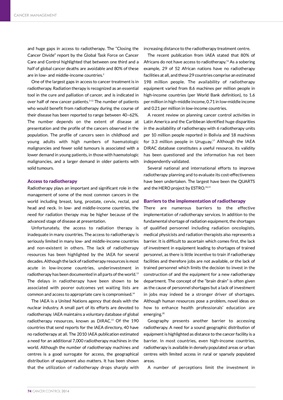 hard to find personnel, that other priorities in cancer care

are more important, and that in the longer term newer

treatments will replace radiotherapy and therefore the

investment is not required. These perceptions have limited

the implementation of appropriate radiotherapy resources

in many countries, even in well-resourced ones. There is also

a long-standing perception that cancer is a systemic illness

and the investment in local treatment modalities will not

reduce death rates. The hope for a better systemic therapy,

initially with systemic chemotherapy and now with

investing in radiotherapy. In the meantime, while the

dying from the lack of access to proven therapies.

Radiation therapy is also perceived as an expensive

over many years. Even when priced in high-income

countries, radiotherapy is one of the more cost-effective

Another factor is the relatively small manufacturing sector

engaged in producing radiotherapy equipment. Since

industry is fuelled by demand, the lack of investment by

governments in radiotherapy keeps the supply small and the

costs high. This is in contrast to the pharmaceutical industry

where high demand and a large industry have driven the

costs of drugs down in lower income countries. A small

industry does not have the same lobbying power further

limiting the solution to the problem.

There is an urgent need to recognize that radiotherapy is one

will only exacerbate the burden of cancer and will reinforce

this continuing cancer disparity in the world.

Significant effort has been made to address this deficiency

by the IAEA and the Program of Action for Cancer Therapy

21 However, the speed of progress is far too slow. The

scale of the problem calls for a more urgent response. The

resources of the IAEA, whose mandate does not include

cancer care, are insufficient to solve the problem. In fact, the

mistaken idea that there is a United Nations agency that is

responsible for radiotherapy gives a false sense of security

and comfort. With a lack of investment by governments in

unaffordable radiotherapy have emerged in many countries.

and is largely unappealing to private investors. Therefore, an

‰ Treatment is an important element of cancer control

(prevention and treatment are complementary).

‰ Radiotheraphy (RT) is an indispensible element of a

‰ The societal benefits of RT depend on its accessibility

world, both rich and poor.

countries has the potential to reduce the burden of

‰ Increasing the use of RT in lower income countries

presents unique challenges, but none should be regarded

‰ The core elements of a radiation facility are well

‰ Investments in human resources and education are

required for safety and stability.

‰ A systems-thinking approach is required to address the

‰ Radiotherapy systems are complex and require a high

‰ There is a need and opportunity for international

collaboration and harmonization of national guidance

Professor Mary K Gospodarowicz is President of the Union for

International Cancer Control and has been active since 1990 in

Prognostic Factors Project. She was elected to the Board of

Directors from its inception, serving as a member of the Policy

and Finance Committees, UICC Treasurer, Chair of the

She is also the Medical Director of the Princess Margaret

Cancer Centre at the University Health Network in Toronto,

Canada and Regional Vice-President of Cancer Care Ontario for

Toronto South. She recently completed a 10 year term as

Professor and Chair of the Department of Radiation Oncology

at the University of Toronto and Chief of the Radiation Medicine

She has edited three editions of Prognostic Factors in Cancer